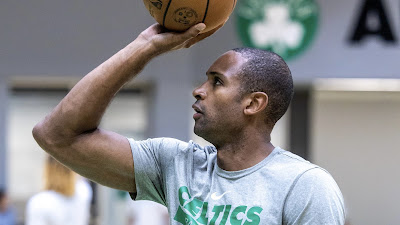 With reports that suspended coach Ime Udoka is heading to the Brooklyn Nets following the firing Steve Nash, it's been a lot to process for the Celtics roster.
While Marcus Smart believes "it makes no sense" that Udoka could be not only be returning to sidelines so soon, but that he'll be coaching a division rival in the process, count Al Horford as one that has already moved on from the situation when asked Friday morning following shootaround.

"We'll see how that develops. Right now, our focus is on our group and continuing to move forward," Horford told reporters ahead of tonight's matchup against the Chicago Bulls at TD Garden. "If that materializes for [Udoka], obviously we'll be happy for him, but at this point, we've already moved forward. We need to bounce back. That's what's on my mind."

Udoka has been serving a season-long suspension since late September after violating team policies and Joe Mazzulla became interim head coach just days prior to training camp, with the full support of the Celtics players. But with their former head coach in Udoka, who brought them to the NBA Finals in his first year at the helm now potentially heading to Brooklyn -- it has to be somewhat of a headscratcher at this point for many on the roster.
Though Horford fully understands where his teammates are coming from, the veteran is a firm believer in looking ahead and focusing on the original goal of getting back to Finals to compete for a championship.

"That's something that's there. It's a real thing. But at the end of the day we have a job we have to do," Horford said. "We have a season in front of us. We've prepared for this.
"If that ends up happening for Ime, we'd be happy for him, but at this point, man, we've got to look ahead. The games are coming on. Things are not going to get easier, and we've got a big challenge starting tonight with Chicago. So, our group, we're moving ahead. We have to focus and look ahead."

Boston has lost three out of their last four after starting the season 3-0, including a second overtime loss to the Cleveland Cavaliers on Wednesday. Horford and the Celtics will look to avenge an 18-point blowout at the hands of the Bulls last week when they host them tonight, as tip-off is at 7:30 ET on ESPN.
Joel Pavón
Follow @Joe1_CSP