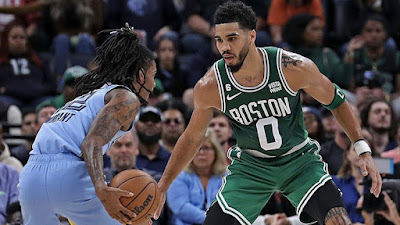 The Celtics held on to beat the Memphis Grizzlies Monday night 109-106 at FedEx Forum.
Jayson Tatum finished with a game-high 39 points on 12-of-25 shooting and 12-of-16 from the free throw line, including two clutch freebies with 2.2 seconds left to lift the C's to their third win in a row.
Jaylen Brown added 21 points, nine rebounds, while Marcus Smart (seven rebounds, 12 assists) and a returning Al Horford each contributed with 15 points to help Boston improve to 7-3 on the season.
Despite Ja Morant (eight rebounds, nine assists) scoring 30 points, the Celtics held him to 10-of-24 from the field, while being unable to get off a final shot after slipping in the backcourt.
The Grizzlies were averaging 117.1 points per-contest (ranked fourth in the NBA) heading into their matchup against the league's highest scoring team in Boston at 118.8 per-game.

"That's really our identity," Tatum said in his postgame presser. "We're shooting the ball well for the most part, but the thing that helped us get to the championship last year was defending Brooklyn, defending Miami and Milwaukee and things like that. Defense is going to get us ultimately to where we want to get to."

Desmond Bane had 19 points and Dillion Brooks chipped in 13 points, seven rebounds for Memphis, who fell to 7-4.
After hitting a franchise-record 27 3-pointers in their win over the New York Knicks Saturday, the Celtics were only 12-of-37 from behind the arc against the Grizzlies.
Boston used a 27-4 run in the second period on their way to outscoring the Grizz 37-20 to end the half and Tatum netted 19 of his 25 points in the quarter alone. But Memphis grabbed a 85-84 lead heading into the final frame after a 31-19 advantage in the third.
The Celtics went on a 10-0 spurt to break a 90-90 tie with 5:28 remaining and the Grizzlies made one last 16-7 rally to get within one on a Bane 27-footer from beyond the arc in the final 3.5 seconds, before Tatum -- who had missed two previous from the charity stripe -- put the game away with a pair of clutch made free throws.
Boston will return to TD Garden and host the Detroit Pistons (3-8) on Wednesday night, as tip-off is at 7:30 ET.
Game Notes:
Celtics shot 46.3% from the field, 32.4% from deep, while Memphis made 45.1% of their attempts and 34.1% (15-of-44) from 3. Boston turned the ball over 15 times to the Grizzlies' 11, while the C's dished out 26 assists on 38 made baskets and the home team had 27 dimes on 41 made buckets. Both clubs scored 48 points in the paint apiece and each grabbed 45 rebounds respectively.
Joel Pavón
Follow @Joe1_CSP