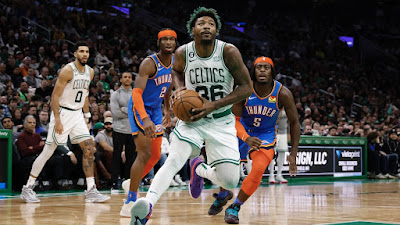 The Celtics were able to hold off the Oklahoma City Thunder at TD Garden Monday to squeeze out a 126-122 victory.
Jayson Tatum had 27 points, despite shooting 9-of-23 from the field and 1-of-9 from 3-point territory, to go along with 10 rebounds, while Jaylen Brown scored 26 points on 11-of-21 from the floor, grabbed six rebounds and dished out six assists in the C's seventh straight win.
Marcus Smart netted 20 of his 22 points in the second half and handed out eight assists. Al Horford notched a double-double of 12 points, 11 rebounds for Boston -- who are 11-3 on the young season.
Playing without Malcolm Brogdon (hamstring) for the third consecutive game, the Celtics turned to Derrick White (16 points, five assists, four steals) and Payton Pritchard (10 points) to contribute off the bench, as they both combined for 4-of-8 from deep.

"The first team was a little sluggish. We tried. We was giving it everything we got and just couldn't find it," Smart said in his postgame presser. "And then those two came in and gave us the jump we needed. The energy definitely shifted with those two guys coming into the game."

Shai Gilgeous-Alexander led the Thunder and all scorers with 37 points and eight assists. Lu Dort finished with 21 points, while Josh Giddey (seven rebounds) and Aleksej Pokusevski (14 rebounds) each had 16 points respectively for Oklahoma City - who fell to a 6-8 record.
The Celtics trailed by as much as 15 in the third quarter, before Pritchard hit a buzzer-beating 3-pointer from 31-feet late in the period, then made a steal and a layup as time expired to cut the deficit 96-89 heading into the final frame.
Another 3-ball from Pritchard in the opening minute of the fourth cut the Thunder's lead to 99-94. Boston used a 14-8 spurt to pull ahead by one for the first time since the opening quarter. Smart -- who scored 10 points in the period -- connected on a 3-pointer with 1:48 left to put the C's up (118-115) for good.
Oklahoma City committed 14 additional turnovers in the final two quarters after only having six at the break, a credit to the Celtics' defense and being the more experienced team.

"I thought especially in the second half, we didn’t allow our lack of shot-making to affect our defensive effort," Mazzulla said. "That to me is a sign of growth for the team."

The Celtics will travel to Atlanta to face the Hawks (9-5) Wednesday night to start a three-game road trip. ESPN has the tip-off at 7:30 ET.