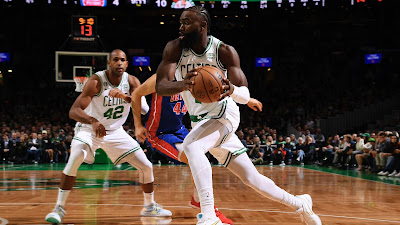 The Celtics pretty much led wire-to-wire as they defeat the Detroit Pistons in a 128-112 blowout victory at TD Garden Wednesday night.
Jayson Tatum continued his hot start by scoring 31 points on 10-of-20 from the field, including 5-of-11 from deep to go along with five assists, while Jaylen Brown netted 30 points (11-of-19) and grabbed seven rebounds to help Boston win their fourth straight.
Sam Hauser shot 6-of-12 from beyond the arc to finish with a career-high 24 points off the bench and Al Horford added 13 points and six rebounds as the C's improved to 8-3 on the season.

"Little by little I'm earning more trust from Joe [Mazzulla]," Hauser said in his postgame presser. "I've still got to keep doing things to earn minutes out there and earning a spot in the rotation."

Malcolm Brogdon scored nine points before being ruled out to return at halftime due to right hamstring tightness.
Jaden Ivey led Detroit with 19 points, 10 rebounds and Saddiq Bey had 18 points. Bojan Bogdanovic contributed with 17 points and Killian Hayes chipped in 16 points off the bench for the Pistons -- who fell to a 3-9 record.
Despite Tatum only having five points at the break, the Celtics led 63-49 before the All-Star forward scored 16 in the first five minutes of the third quarter on his way to 26 second-half points.
With Boston ahead 120-96 (the largest lead of the night) with 5:36 left to play in the final frame -- following a reverse dunk by Brown on a pass from Marcus Smart (his 11th of the night) -- Mazzulla emptied his bench as the C's held the Pistons to 41.6% shooting from the field and 21.2% from 3-point territory for the game.

"When your best players want to play defense, it gives you a chance," said Boston's interim head coach following the win.

Boston outscored the Pistons 48-42 in the paint, but were out-rebounded 48-43. The Celtics handed out 31 assists on 47 made baskets to Detroit's 15 dimes on 37 converted shots. The C's turned the ball over 13 times to the visiting team's 10.
Joel Pavón
Follow @Joe1_CSP