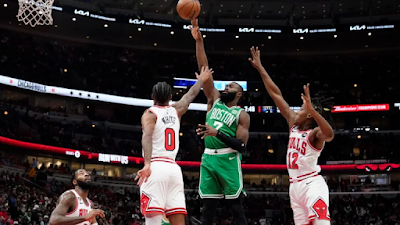 The Celtics were unable to stretch their win streak to 10, as they fell to the Chicago Bulls 121-107 Monday night at the United Center.
Jayson Tatum finished with 28 points, 11 rebounds and seven assists, while Jaylen Brown had 25 points, seven rebounds. Malcolm Brogdon added 23 points (5-of-6 from deep), six assists off the bench and Grant Williams chipped in 13 points, seven rebounds for the C's -- who still have the NBA's best record at 13-4.
Marcus Smart returned to the starting lineup after missing the previous two games with an ankle injury, putting up eight points and eight assists in 35 minutes of action.
DeMar DeRozan led Chicago with 28 points on 11-of-24 shooting and Zach LaVine scored 22 points, despite going 8-of-20 from the field. Patrick Williams netted 17 points and Nikola Vucevic notched a double-double of 12 points, 13 rebounds to go along with six assists, as Chicago snapped a four-game skid and improved to 7-10 on the season.
The Celtics were ice cold in the first half, going 8-of-26 from 3-point territory and 37% overall from the field to trail 63-50 at the break, before the deficit grew to 21 (the largest of the night) on a LaVine 3-pointer with 8:44 left in the third quarter.
Boston went on a 12-4 run, only to have the Bulls respond with a 13-6 spurt, taking a 95-79 advantage into the final frame.
Another 10-2 run by the Celtics to start the fourth period cut it to single-digits (89-97) and one last rally didn't get them any closer than 10 the rest of the way, as Chicago iced the game by outscoring the C's 12-8 in the last 4:49 to play.
The Bulls are 2-1 against Boston this season and are the only team along with the Cleveland Cavaliers (2-0) to hand the reigning Eastern Conference champions their four losses so far.

"They did a great job coming out being the more desperate and hungrier team," said interim head coach Joe Mazzulla on Chicago's energy and effort from the start.

The Celtics return to TD Garden on Thanksgiving Eve to host the Dallas Mavericks to kick off a six-game home stand (the longest of the season). ESPN will have the tip-off at 7:30 ET.