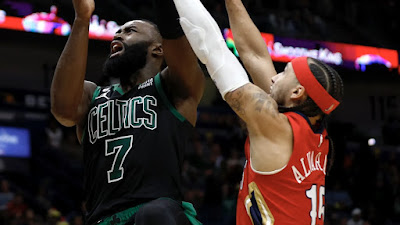 The Celtics beat the New Orleans Pelicans 117-109 at Smoothie King Center Friday night for their ninth straight win.
Jaylen Brown scored a game-high 27 points on 10-of-20 from the field, including 3-of-6 from 3-point territory, to go along with 10 rebounds and seven assists. Derrick White had 26 points and hit 6-of-8 from deep, while Jayson Tatum -- who didn't shoot well (6-of-18 from the floor and 2-of-10 from 3) -- added 19 points, seven rebounds and 10 assists.

"We can't try to look too far ahead and forget about the details that need to be taken care of right in front of us," Brown said in his postgame presser. "We can’t take if for granted and get excited. Every day counts. Every game game counts. We've got to continue to find ways to win. Tonight, we had some rough patches but it was a good example of still finding a way to get a W."

Al Horford netted 18 points (4-of-5 from long-distance) and Grant Williams chipped in 12 points for the Celtics -- after leading by as many as 19 and knocking down 20 3s to improve to an NBA's best 13-3 on the season.
Malcolm Brogdon made his return after missing the previous four matchups with a sore hamstring, but Marcus Smart sat out for a second consecutive game due to an ankle injury.
Brandon Ingram led the New Orleans with 25 points, seven assists and CJ McCollum struggled on 7-of-18 shooting to finish with 18 points. Herbert Jones had 17 points and Larry Nance Jr. contributed with 16 points, eight rebounds off the bench, as the Pelicans fell to a 9-7 record.
Boston got off to another hot start, tying a franchise-high of 10 3-pointers in the first quarter and took a 40-25 advantage into the second period.

"The first quarter they knocked us on our heels right away and it was an uphill battle from there," said Pelicans coach Willie Green during his postgame comments. "I don't think we had a sense of urgency of how quick, how well they drive and kick to each other, and catch and shoot."

"We came out well, got out to an early lead, kind of took our foot off the gas a little bit," Brown said after the game. "We were still able to win, but that's something that we got to be better at."

With the Celtics essentially leading wire-to-wire, New Orleans cut their deficit to single-digits on several occasions in the final frame. Following an Ingram 3-ball (one of his season-high five makes), the Pelicans were down 105-97 with 3:54 left to play, but never got within less than seven the rest of the way.
Despite New Orleans' run midway through the fourth, C's interim head coach Joe Mazzulla refused to call a timeout, as his players figured out how to stop the bleeding and secured the victory in the final minutes.

"In order for us to be a great team we have to handle those situations, we've got to build awareness," Mazzulla told reporters. "Our guys are very intentional about studying the game and they talk a lot about situational basketball. Usually, when you have to call timeout it's because you're not doing something you're supposed to be doing.