Al Horford says 'It's been a big adjustment' becoming a shooter 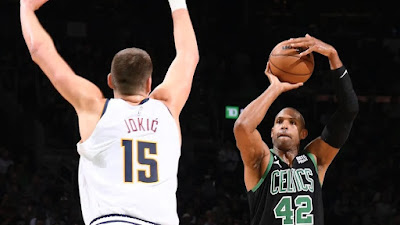 Al Horford is having a career season when it comes to his overall shooting so far in the first 10 games.
Coming off a 21-point performance -- hitting 6-of-8 from deep and 7-of-12 overall -- in the Celtics 133-112 victory over the Denver Nuggets Friday night, Horford came in his hot after connecting on 13-of-14 from the field combined in the two games prior.
The veteran has made 55.8% of his attempts, including 47.8% from behind the arc, both a career-best to start the 2022-23 campaign. In year 16, Horford understands that keeping up with his outside shooting is what will extend his pro career well into his 30s, as he continues to compete for a championship.

"It's been a big adjustment," Horford said postgame. "This summer, that's something that we looked at and I understood that I needed to work on that even more. Be more comfortable and we really worked at it this summer. Mentally, I'm getting in that mindset of understanding that I'm shooting more 3s. That's just the way it is. The game continues to change and for me, it's trying to find a way that I can change, too."

Having yet to play in any back-to-backs this season, Horford's minutes have been carefully monitored and it's paying dividends as the Celtics currently find themselves with a 9-3 record and are on a five-game win streak. Still, the 36-year old credits the team's offensive schemes as a reason for the early success.

"We're getting to our spaces, we're giving Jayson, Jaylen room to operate and do things," Horford said. "I feel like that's been one of the big differences but also Jayson, Jaylen, Marcus are going a good job of reading the defense and understanding when they have to kick out, not trying to take that extra dribble, things like that."

Jayson Tatum, who's off to an impressive start himself, especially when it comes to his offense, gave high praise to Horford -- while also not being shocked that the five-time All-Star continues to play at a high level.

"For him to still be the same person, at 36 years old, to still be a starter for us this season and last season just shows how he takes care of his body every single day," Tatum said in his postgame presser. "And even if he's not the most vocal guy, he's someone I've always learned from of how to go about things. It's not a given you're going to play 16 years in the league and he's still at the top of his game.

"No surprise that he's playing the way he is, but he deserves a lot of credit for the success that we have this season and continue to have, and obviously last season."

Tatum went on to call Horford a positive influence since his rookie season and one of his overall best teammates.

"Al is for sure one of the best teammates I've ever had at any level. I think about being 19 and coming in my first year and him taking me under his wing from a professional standpoint. I remember the first training camp, every day after practice, he would just encourage me and ask me how I was feeling. Good days and bad days, he always seemed to check up on me," Tatum said.

While Horford's 11.2 points, 6.1 rebounds and 2.1 assists are not eye popping stats, his impact goes beyond the box score and many like Tatum can appreciate the big man's worth as the "ultimate teammate."

Horford is set to sit out and rest when the Celtics head to Detroit Saturday on a second night of a back-to-back to face the Pistons (3-10).
Joel Pavón
Follow @Joe1_CSP