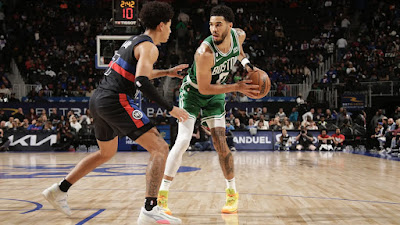 The shorthanded Celtics beat the Detroit Pistons on the road 117-108 Saturday night at Little Cesar Arena.
Jayson Tatum scored 28 of his season-high 43 points in the second half, to finish 14-of-28 from the field -- including hitting 7-of-14 from deep -- to go along with 10 rebounds and three assists.
Grant Williams notched a double-double of 19 points (7-of-12 shooting), 10 rebounds, while Marcus Smart added 18 points (4-of-10 from behind the arc), 10 assists to help the C's with their sixth straight win and improve to 10-3 on the season.

"That was a chaotic, hectic game, and that's what I thrive on," Smart said in his postgame presser. "We were short-handed tonight, but a lot of guys stepped up and made it a real team effort."

The Celtics were without Malcolm Brogdon (hamstring tightness) again, Jaylen Brown (knee) and Al Horford (back) on a second night of a back-to-back.

"With it being the second half of a back-to-back, and (Brown's) knee having less than 24 hours to heal, we decided it was the best move to get him out for tonight," Celtics interim coach Joe Mazzula said during his postgame comments. "We're hoping he'll be ready for Monday."