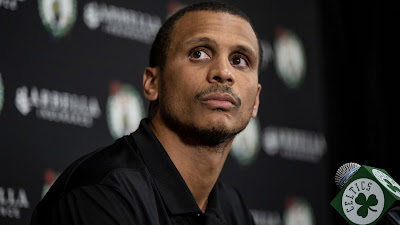 The Celtics have the best record in the league through the first 15 games at 12-3, following their 126-101 victory over the Atlanta Hawks Wednesday night, winning their eighth straight.
For Joe Mazzulla, he's tied for the best start for a rookie coach coach in franchise history since Chris Ford, despite having the "interim" title for now, after taking over in late September for Ime Udoka -- who's currently serving a one-year suspension.
While Udoka's status remains uncertain since being suspended by the Celtics for violating team policies, he was recently linked however to the Brooklyn Nets' vacant head coaching gig, until they ultimately made top assistant Jacque Vaughn their full-time coach.
Meanwhile, according to ESPN's Adrian Wojnarowski, Udoka has essentially coached his last game in Boston and Mazzulla will become the Celtics 'long-term' head coach, despite there being a delay while the team figures out their current situation surrounding Udoka still being employed.

"Everything is aligned and in place for Joe Mazzulla to be the long-term coach for the Boston Celtics, except for one thing: Ime Udoka is technically still the head coach of the Boston Celtics on suspension," Wojnarowski said Thursday "But for all intents and purposes, [Udoka] has coached his last game in Boston. This is uncharted territory, certainly."

How soon will this be resolved with Udoka and the Celtics removing the "interim" role for Mazzulla? It appears the wait could be until next year or if Udoka is hired by another team in the meantime.

"Unless Ime Udoka takes another job this season elsewhere, it still may be an interim label until the end of the year," said Wojnarowski.

Mazzulla has proven that Celtics president of basketball operations Brad Stevens made the right choice, given the circumstances, to lead a roster coming off an NBA Finals appearance and a long-term contract is in his future, sooner rather than later -- especially if the team and Udoka can work out some sort of mutual departure.

"Mazzulla has handled this very well. He has a locker room of key players who were very fond of Udoka and still very fond of him. [Mazzulla] has certainly navigated that. He had his own relationships. You have seen him command the respect of this group, but how this team has performed. Continuing at a very high level.
"There's every indicated that interim status will eventually leave and he’ll be on a long-term deal as the Celtics' coach, but it may not be until after the season," Wojnarowski added.

The Celtics look to make it a league-leading nine wins in a row when they face off against the New Orleans Pelicans tonight.
Joel Pavón
Follow @Joe1_CSP