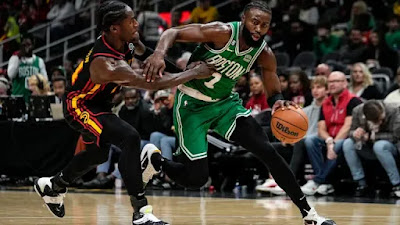 The Celtics essentially led wire-to-wire in a 126-101 blowout over the Atlanta Hawks Wednesday night at State Farm Arena.
Jaylen Brown finished with a team-high 22 points, while Jayson Tatum had 19 points, seven rebounds and eight assists in the C's eighth straight victory.
Grant Williams added 18 points, with Sam Hauser (5-of-6 from 3-point territory) and Luke Kornet (a perfect 7-of-7) each contributed 15 points apiece off the bench.
Boston was without Malcolm Brogdon (hamstring) for a fourth consecutive game and Marcus Smart (ankle) -- who came up big in the team's comeback win at home over the Oklahoma City Thunder Monday.
Derrick White netted 16 points to go along with 10 assists as the starting point guard and Payton Pritchard chipped in 14 points on 4-of-6 attempts from behind the arc as his back-up to help the Celtics improve to a league-best 12-3 on the season.

"We got a lot of guys that can do a lot of things. That's just a credit to the depth we have," said White in his postgame interview. "Every person that goes out there, we think can contribute and do good things, and we came here on the road and got a good win."

"Our guys focus, they execute and do a great job working on points of emphasis," said interim head coach Joe Mazzulla in postgame presser.

The Celtics continue their mini road-trip in New Orleans Friday when they take on the Pelicans.
Game Notes:
Boston handed out 29 assists on 48 made shots to the Hawks' 21 assists on 42 baskets. The C's out-rebounded Atlanta 49-45, but were outscored in the paint 58-50.
Joel Pavón
Follow @Joe1_CSP