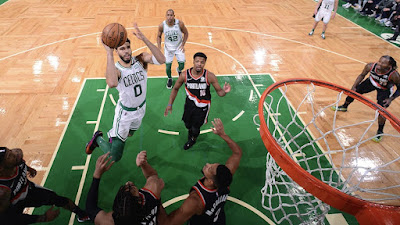 The Celtics blew another late fourth quarter double-digit lead, as they fell to the Portland Trail Blazers 109-105 Friday night at TD Garden.
Jayson Tatum finished with 27 points on 8-of-19 shooting, to go along with 10 rebounds and seven assists -- but did go 0-of-6 from deep, including a missed step back 3 in the final seconds with the Celtics trailing 105-104. The All-Star forward continues to be in middle of a major slump from behind the arc in the last four games hitting only one of his last 22 attempts.

"Sometimes I watch film and see some things I could adjust. Over the course of 82 games, sometimes you just miss," said Tatum during his postgame presser. "But you put too much work in to doubt yourself. So, there's always the next game."

Jaylen Brown had 22 points, while Grant Williams added 13 points and Romeo Langford chipped in 12 off the bench for the C's, who are 23-24 on the season. Marcus Smart missed his sixth straight game due to reconditioning after clearing NBA's Health and Safety Protocols.
Jusuf Nurkic had a game-high 29 points and 17 rebounds to lead Portland, who was playing without Damian Lillard. CJ McCollum scored 24 points and Anfernee Simons netted 21 for the 19-26 Trail Blazers.
Brown nailed a buzzer beating 3 to put the Celtics up 58-54 at halftime, as part of a 33-point second quarter. However, they trailed 83-82 heading into the final frame before outscoring the Blazers 10-6 to start the fourth and followed that up with eight unanswered points -- holding Portland scoreless for four minutes in that span.
The Celtics had an 100-89 advantage, the largest of the night, with 7:19 left to play on a Grant Williams layup -- which would be Boston's last made field goal the rest of the way.
A McCollum 3 sparked a 20-5 run for the Trail Blazers, including a Robert Covington go-ahead corner (103-102) triple with less than a minute left to play.
Tatum's two made free throws out of a timeout gave the Celtics its only lead in the final 26.8 seconds, but it was short-lived once Nurkic hit a hook shot after grabbing an offensive board to put the Blazers up for good on the very next play.
Portland would convert their next four straight free throws after Tatum's missed step back 3 attempt to ice the game in the closing seconds.

"We've just got to stay healthy and put a run together. We've had some bad losses, obviously, and we beat the best teams," Tatum said. "We've just got to be more consistent and be better more often than we have."

Boston went 6-of-17 from the field in the fourth for their second straight loss, falling back below .500 again and are now 4-12 in games decided by five points or less.

"We had turned somewhat of a corner lately in some fourth quarters, made the proper plays defensively and offensively and then made timely shots, as well," said C's coach Ime Udoka. "I felt like we took a little step back as far as that obviously in the fourth quarter with the end of the game drought and the run they made."