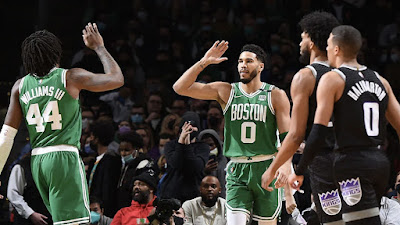 The Celtics never took their foot off the gas from the opening tip, as they cruised past the visiting Sacramento Kings 128-75 Tuesday night at TD Garden.
Jayson Tatum finished with a game-high 36 points on 14-of-23 shooting and had another great performance from beyond arc -- going 7-of-14 to go along with six assists. Jaylen Brown scored 30 points while hitting 11-of-19 from the field, including 5-of-12 from deep and also grabbed 10 rebounds. Both All-Stars sat the entire fourth quarter in the 53-point win.

"We were sharing the wealth. Everybody contributed. Everybody was hitting shots. We scored 128 points," Tatum said in his postgame presser. "It was just a great night overall for everybody."

Robert Williams recorded a double-double of 13 points and a career-best 17 rebounds. Josh Richardson added 14 points, eight rebounds off the bench and Aaron Nesmith chipped in 10 points for the Celtics, who have won two and a row and are 25-24 on the season.
Buddy Hield led the Kings with 11 points -- the only Sacramento player to reach double-digit scoring. Richaun Holmes netted nine points and hauled down nine rebounds, while Tyrese Haliburton also registered seven points and seven assists in the team's fourth straight loss.
The Kings were without their leading scorer De'Aaron, who missed his second consecutive game with an ankle injury.
The Celtics jumped out to a 11-0 lead to open up the first and never looked back, then went on a 16-0 run later in the quarter, holding the Kings to just 13 points to finish the period -- trailing 38-13 after being held to 1-of-12 from 3 and 5-of-29 overall.
Boston led 33-7 during their 16-0 spurt, while Brown outscored the Kings by himself 15-13. Richardson nailed a 3-pointer with 1.1 seconds left to end the half and give the C's a 63-30 advantage at intermission.

"We were getting stops and forcing them into tough shots," Richardson said in his postgame comments. "That gave us a lot of opportunities to get out and run and be able to use our athletic ability and take better shots."

"It was kind of hard for us to mess that game up off the bench. The starters got us off to such a good start both halves," Richardson said.

The Celtics continued to pour it on with a 10-3 run to start the second half and led by as many as 60 late in the fourth quarter well after coach Ime Udoka emptied his bench. The Kings fell to an 18-31 record on the year.
Udoka spoke about Tatum -- who was coming off a 51-point outburst against the Washington Wizards -- and Brown leading the Celtics to back-to-back blowout victories by combining to score more than half of the teams total points in both games.

"They are the two pillars and leaders of the team and when they come out and play with that intensity, everybody seems to follow suit," Udoka said.

The Celtics will look to win their third straight after a couple of days off, before traveling to Atlanta to face the Hawks (21-25) Friday night.