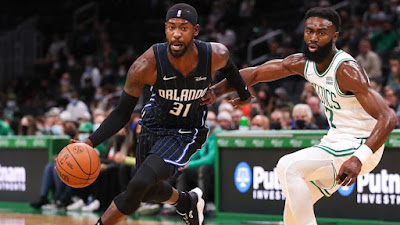 The Celtics are looking to upgrade their shooting before today's NBA trade deadline at 3 PM ET and according to Gary Washburn of the Boston Globe, their "primary target" is Terrence Ross.
The 6-foot-6 wing is averaging 10.9 points 2.6 rebounds and 2.0 assists for the Orlando Magic this season in a role off the bench. Despite shooting 30.8% from 3 this year, he's hit 36.4% of his 3s throughout his career. A trade package for Ross could include Dennis Schröder, plus another player and a draft pick, per Washburn's report.
Ross is set to make $12.5 million this season and $11.5 million following the 2022-23 campaign in the final season of a four-year deal he signed with the Magic back in 2019.
Aside from matching salary with the combination of Schröder's $5.9 million contract and possibly Aaron Nesmith or Romeo Langford, plus another filler to make the swap work, the Celtics could also use the $17.1 million traded player exception they created in the Evan Fournier sign-and-trade deal this past summer to absorb Ross' salary as another option.
The move would give the Celtics another shooter in Ross that they desperately need, while Schröder wouldn't be in the Magic's long-term plans -- meaning the veteran guard would be moved to either a third team or simply bought out, as they continue to rebuild.
Schröder is averaging 18.6 points on 48.6% shooting from the field and 38.1% from deep in 25 games this season as a starter in comparison to 9.9 points on 36.8% from the floor and 29.7% from behind the arc in 24 games as a reserve.
Celtics president of basketball operations Brad Stevens has several trade exceptions he could use in any potential deals -- including the $6.8 million TPE from the Kemba Walker trade to Oklahoma City and a $5 million exception that was created when former C's GM Danny Ainge traded Daniel Theis to the Chicago Bulls at last season's deadline.
Joel Pavón
Follow @Joe1_CSP