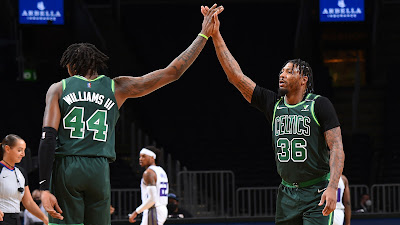 The Celtics will get a much needed boast defensively when Marcus Smart and Robert Williams make their return to the lineup against the new look Brooklyn Nets Thursday night.
C's head coach Ime Udoka told reporters following practice Wednesday afternoon that both Smart and Williams were expected to play.
Smart suffered a right ankle sprain in the second quarter of the Celtics blowout win over the Philadelphia 76ers and sat out of the team's surprising loss to the Detroit Pistons. Meanwhile, Williams also missed the last two games against the Sixers and Pistons just prior to the All-Star break with right calf tightness.
Despite there being no swelling, Smart says he's sill pushing through some pain while dealing with a bone bruise in his ankle.

Udoka is also happy to have Williams back, anchoring the defense in the middle with 22 games remaining in the regular season.

"That's the guy that most teams want to stay away from in general," said Udoka during his Thursday pregame presser on Williams' defensive presence.

The Celtics have had the NBA's best defensive rating since January 1, when they were riding a nine-game win streak before running into an overachieving Detroit team and without its two best defenders. They currently find themselves with a 34-26 record and sixth in the East, while going 9-1 in the month of February so far.
TNT will have the tip-off between Boston and the Nets (31-28) in Brooklyn, beginning at 7:30 PM ET.
Joel Pavón
Follow @Joe1_CSP