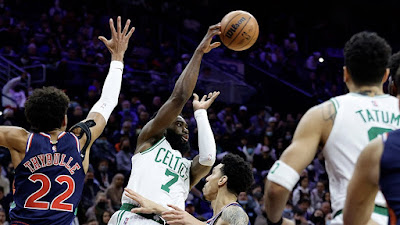 The Celtics continued their hot streak Tuesday night, as they beat the Philadelphia 76ers in a 135-87 blowout victory at Wells Fargo Center.
Jaylen Brown scored 26 of his game-high 29 points in the first half on 10-of-17 shooting from the field, including going 5-of-7 from deep, to go along with his eight rebounds to lead the C's to their ninth straight win.

"This is a game that we all talked about," Brown said in postgame presser. "We wanted this one. And we got the job done tonight. It feels good."

Jayson Tatum went 4-of-8 from 3-point territory to finish with 28 points, 12 rebound and six assists, while Aaron Nesmith added 18 points off the bench for the Celtics, who find themselves 3.5 games out of first place with a 34-25 record.

"I think we've just been playing better overall," said Tatum during his postgame comments, as Boston has won 11 of their last 12. "I think we've been really clicking well as a unit, starting games on both ends of the floor."

The Celtics led by as many as 51 points in a wire-to-wire dominating performance on the road. It was the largest margin of victory over the Sixers in a rivalry that has seen these two teams play one another 457 times. Boston's previous biggest win against their division foe was a 124-87 rout of the 76ers back on Dec. 20, 1987.
Joel Embiid was held to 19 points (3-of-9 shooting), snapping his streak of 31 games in a row where the league's leader scorer, entering the night, has registered at least 25 points. He also had nine rebounds and six assists, while Tyrese Maxey was the only other 76er to record double-digits points with 11.
Philadelphia, who are now 34-23 (fourth in the East) on the season, only hit 28.7% from the floor and 8-of-32 (25%) from behind the 3-point arc.

"You watch Boston play, and you can literally see the improvement of their ball movement. The old Boston is more isos. This Boston is driving and playing with each other. That's what makes them so much tougher...

James Harden (hamstring) did not suit up for the Sixers, despite making his first appearance in Philly since being traded from the Brooklyn Nets in exchange for Ben Simmons just hours prior to this past Thursday's deadline.
The Celtics jumped out to 16-4 lead to open the game, before using a 20-6 run to start the second quarter that eventually turned into a 69-42 advantage at the break -- as Brown and Tatum (16 points) alone had just as many points combined to Philadelphia's halftime total.
Boston kept pouring it on in the third, limiting the 76ers to just 16 points in the period, while the C's scored 32 -- 15 of which came from 3s -- drawing boos from the home crowd just before Rivers cleared his bench.
The Celtics broke a franchise record for the most made 3s in a game, hitting 25-of-45 (55.6%) attempts to help beat the Sixers and even the season-series 2-2.

"We are playing how we play regardless of opponent," said Boston coach Ime Udoka after the second largest road win in Celtic history. "I love the resolve of what we're doing. To see the crowd leave in probably the third quarter was an impressive thing for us. And I think our team relished that."

Once again Boston held an opponent below 90 points, to make it a league leading 9-0 this season. They also become the first team in NBA history to win three straight road games by at least 30 points.
The Celtics will look to make it 10 in a row when they return home Wednesday, on a second night of a back-to-back, to host the Detroit Pistons (12-45) at TD Garden -- their last game before the All-Star break.

Boston had 28 assists on 46 made baskets, plus outrebounded the 76ers 51-40 and swatted away 10 shots.
Robert Williams (right sore calf) did not play Tuesday and is listed as doubtful against the Pistons, while Marcus Smart is also listed as doubtful after rolling his ankle late in the second quarter when he stepped on Joel Embiid's foot.
Daniel Theis saw the floor for the first time since being traded back to the Celtics, finishing with five points, nine rebounds and four blocks in 20 minutes off the bench.
Joel Pavón
Follow @Joe1_CSP