Daniel Theis to make Celtics debut vs 76ers, 'Grateful to be back' 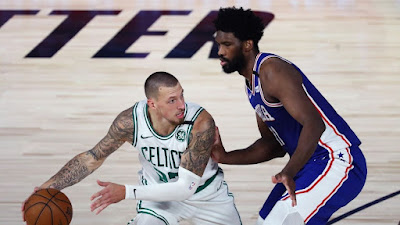 Daniel Theis will make his return as a Celtic tonight against the Philadelphia 76ers, following a deadline trade with the Houston Rockets officially being finalized.
The 29-year-old center is back in Boston where he started his NBA career, but now he'll get his chance to suit up after watching from the sidelines the last two games.

"It felt like I never left," said Theis, whom the Celtics re-acquired Thursday in exchange for Bruno Fernando, Enes Freedom, and Dennis Schroder. "All the same guys I played with are still here, with the addition of Derrick [White] and some young guys … I'm happy and grateful to be back."

Theis finally got to practice for the first time Tuesday morning with his teammates ahead of their matchup against the Sixers. According to C's coach Ime Udoka, Theis fit right in to the session like he had been with the roster all season long.

"Going through his first shootaround today, a lot of familiarity with this group," Udoka said in his post-practice presser. "They've all been here with him and so we're excited to add him to the mix. And he does a lot of things that we do already. He's a big that can switch and guard inside, outside so it kind of fits right in as far as that. Another guy you can play with Al [Horford] and match him in similar the way we use Rob [Williams]. And so I think it's a pretty seamless fit as far as that and it's just a matter of him getting back up to game shape."

Despite averaging 8.4 points and 5.0 rebounds per game in 26 appearances (21 starts), Theis fell out of Houston's rotation in mid-January, as the Rockets began to develop their younger players. The German big man will most likely play roughly 20 minutes when the Celtics face the 76ers Tuesday at the Wells Fargo Center.

"A month is a month; you can get shots and some script sessions up with us but that's obviously not game speed," said Udoka. "And jumping into a highly contested game tonight is going to take some toll. And then you have to take into regard, we have a back-to-back coming up (with a home game Wednesday night against the Detroit Pistons). And so, we'll be cautious of that, but it depends on how he's playing, honestly."

Theis is all too familiar with Joel Embiid and Sixers (34-22), in hopes of being able to make an immediate impact, as the Celtics are currently ridding an eight-game win streak with a 33-25 record (sixth seed) -- two games behind Philly, who are in fourth place.

"To see them play hard like this, especially the last six weeks when they changed some defensive stuff, it's just great basketball," Theis said of the C's, who have won 10 of their last 11. "Just sharing the ball, and Rob as a rim protector, it looks fun. The last two games I watched, one from the locker room and one from the sideline, it's fun to watch."