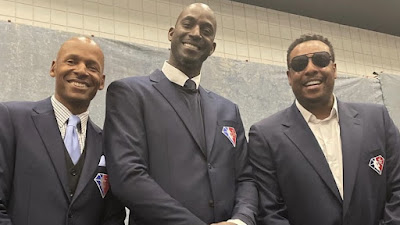 The Celtics are set to retire Kevin Garnett's No. 5 jersey next month and it appears that Ray Allen will likely be the only member of the new "Big Three" not to have his number raised to the TD Garden rafters.
Former C's big man and teammate of Allen -- for three seasons (2007-11) -- Kendrick Perkins pleaded his case for the franchise to change that. During his "Swagu & Perk" show on ESPN, Perkins gave his reasons why No. 20 should be retired during a discussion with Marc Spears.

Pierce had his No. 34 retired back in 2018, following a Hall of Fame career that included 10 All-Star teams over 15 seasons in Boston, while becoming the second-leading scorer in franchise history behind John Havlicek.
Garnett only spent six seasons with the Celtics, but he changed the culture of the team while still playing at an All-Star level during his entire tenure in Boston from the age of 31 until he was 37.
While Allen is a Hall of Famer, he spent just five seasons with the Celtics and missed 36 games during the 2011-12 campaign (his final one with the C's). Though he found more team success in Boston, Allen averaged more in both Milwaukee (19.6 points per game over his first seven seasons) and Seattle (24.6 points per game over five seasons).
Perk's argument for Allen to get his number retired seems like a long-shot, especially since Garnett will be the franchise's 23rd jersey to be raised and it completes the most recent banner -- meaning the Celtics would have to start a whole new one just to retire No. 20, a number that has already been worn since Allen took his talents to South Beach nearly a decade ago.
In any case, at least it seems like the "Big-Three" have finally mended fences following a picture of the three 2008 NBA champions that went viral over this past All-Star weekend, as all of them were in attendance as part of the 75 greatest players (technically 76) of all-time ceremony in Cleveland.

"I am so happy Paul, Ray, and KG came together," Perkins said. "I don't care if it was just for a photo. Because with that photo, there was some kind of conversation. …That touched me in a different way, bro."

Maybe a conversation about Allen getting his jersey retired has already been had, either way, only time will tell if the Celtics decide to raise No. 20 someday or not.
Joel Pavón
Follow @Joe1_CSP