Jayson Tatum says 'There's so much that bothered me' on missing All-NBA, losing $30M bonus 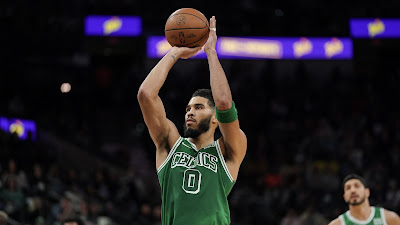 Jayson Tatum is heading to his third All-Star game this weekend, as he'll replace an injured Kevin Durant as a starter for the second year in a row when they take on Team LeBron Sunday night in Cleveland.
In a recent interview with JJ Redick, we were reminded that the Celtics forward not only missed out on All-NBA honors last season, but be he also lost roughly a $30 million bonus as part of an incentive in his rookie scale max-extension due to not being selected.
Tatum was asked on the latest episode of The Old Man & The Three Podcast if any criticism has ever bothered him throughout his five-plus years in the NBA, to which he opened up about the All-NBA snub being the one time he let someone else's opinion get the best of him.

"The only time I let it affect me, I remember last year, in the playoffs -- playoffs might have been over -- everybody was coming out with their All NBA ballots and podcasts, and who they were voting for," Tatum said. "I had $30 million on the line to make it. Now, I specifically remember one person saying, "I'm not a fan of his shot selection, so I just couldn't put him on my All NBA ballot," and I was like, I was baffled."

Attached as a bonus to the Celtics All-Star's five-year, $165 million contract extension, Tatum was due an additional $32.6 million if he made one of the league's three All-NBA teams, which would have been upwards of $195.6 million over the length of the deal. In other words, he would have qualified to earn 30% of the league's salary cap versus 25% -- also known as the "Rose Rule."

"If you think about it, the way that it’s set up for the All-NBA stuff," Tatum added. "A lot of guys have incentives for making All-NBA. Everybody knows I didn’t make it last year; I lost $30 million, or whatever. The fact that somebody could have that thought and basically cost someone $30 million -- forget about me, say the next rookie extension guys that come in -- I think that has to change because there’s no criteria set for the media on who they should vote for. It's all opinion-based."

For Tatum it was less about the potential bonus in his deal, but rather that one person's opinion can determine whether or not you should considered a top-15 player in the league in any given season.

"There’s so much that bothered me with that whole situation," Tatum recalled. "The narrative was, 'Jayson didn't make All-NBA, he loses $30 million.' From that headline, nobody's going to feel bad for me, I still got $175 million. Like, nobody's going to feel bad. I don't want anybody to feel bad about the money part. My lifestyle hasn't changed, it's not about that.
"I think just as the results came out and I looked at how people voted, what went into the media members, their process of voting -- that's the frustrating part."

"There's a fine line between paying attention to it and letting it affect you," Tatum said. "Everybody in the NBA hears everything that somebody says about you. I got Twitter. I got Instagram; I watch TV. Even if I don't see it, people sent it to you. I see everything that is said about me; good, bad, or indifferent. I think the bigger you get, the more attention or critique that you receive. I think it’s part of it. The mentality to have is: they don't talk about the players they don't care about.
"So, they're saying something good or bad about you; that means you're somewhat doing your job because they continue to talk about you."

Tatum and the sixth place Celtics (34-26) will look to finish the season on a strong note that hopefully results in going further than a first round exit this time around.
Joel Pavón
Follow @Joe1_CSP