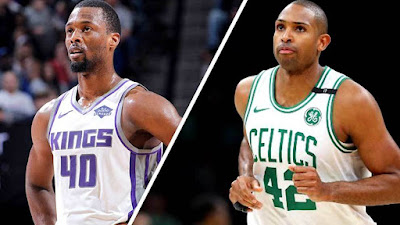 The NBA trade deadline is just days away and the Celtics could appear to be buyers after a season-best four straight victories, including a 7-3 record over the last 10 games.
While the core of Jayson Tatum, Jaylen Brown, Marcus Smart and Robert Williams don't seem likely to be dealt come February 10, one veteran may be on the move when it comes to fan favorite Al Horford in a trade proposal that could land the Celtics Harrison Barnes of the Sacramento Kings.
According to insider Keith Smith, trading for the former champion would benefit the C's as Barnes is a wing who can shoot and instantly become the roster's third best scorer. The veteran forward knows how to play with two All-Stars and has plenty of playoff experience.
The hypothetical package that Smith has put together would also involve third year guard Romeo Langford and a 2022 first-round pick for Harrison and Alex Len in return.
Boston receives:
Sacramento receives:
At 35-years-old, Horford is still a very serviceable big man and moving him would free up minutes for Grant Williams (42.6% from 3) to backup Robert Williams at the five. Meanwhile, Len and his career averages of 6.3 points and 4.7 rebounds per game, could also be given opportunities in the front court depth chart aside from being a throw in to match salaries.
Barnes, 29, has been linked to the Celtics in the past, as he is averaging 16.8 points on 45.6 from the field and 40.6% from deep this season, to go along with 6.6 rebounds and 2.5 assists per contest. He's currently set to make $20.3 million this year and $18.3 million next season.
In the end, both teams would save money, especially the Kings with Horford only guaranteed $14.5 million for the 2022-23 campaign -- making room to land a player or two through trades or via free agency.
The Celtics at 29-25 are only five games out of first place in the East standings and a move like this adds a shooter that can play both forward positions in order to make a playoff push in a wide open conference.
Joel Pavón
Follow @Joe1_CSP