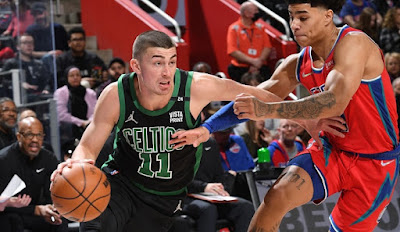 The Celtics keep rolling, as they beat the Detroit Pistons 113-104 at Little Caesars Arena early Saturday afternoon.
Jaylen Brown finished with a game-high 27 points on 10-of-24 shooting, while Jayson Tatum had 26 points, 11 rebounds and six assists in the C's revenge win over a Detroit team that snapped their nine-game win streak heading into the All-Star break just over a week ago.
Boston fell to the Pistons 112-111 back on February 16 at home; the only loss of the month after winning 11 of their last 12 games.

"Those guys always give us their best shot," Brown said in his postgame presser. "We know we have to give them credit, but we felt like we could play better than that, and we did that in the third and fourth quarters tonight."

Payton Pritchard scored 19 points to go along with six assists off the bench and Grant Williams added 13 points for the Celtics, who find themselves 10 games over .500 for the first time this season at 36-26.

"I really feel good about finding a role where I'm helping this team win," Pritchard said in his postgame comments. "It has been a frustrating season at times, but things are going well now."

Cade Cunningham led Detroit with 25 points and seven rebounds in 27 minutes of action, despite getting into foul trouble early. Cory Joseph had 15 points and Marvin Bagley chipped in 14 for the 14-46 Pistons.
It was another tight one through the first three periods, as the Celtics hung on to a 30-26 lead after one and were only ahead 56-54 at the break --  barely shooting over 42% from the field.
Detroit was hitting close to 50% from the floor when they grabbed an 82-78 advantage heading into the final frame and no team led by anymore than six up to that point.

"We knew we hadn't played our best game for the first three quarters, and we knew this team can play well enough to beat us," said Celtics coach Ime Udoka. "We had 12 minutes to suck it up and win the game, and I thought we played one of our best defensive quarters of the season."

Boston used a 22-8 run to start the fourth and go up 100-90 following a 3-pointer by Tatum, who blew a kiss to the crowd and the Pistons called an immediate timeout with 5:11 left to play. The closest Detroit would get was eight the rest of he way, as they were outscored 35-22 in the quarter.
After playing a noon start time, the Celtics will head to Indiana to face the Pacers (20-41) on a second day of a back-to-back Sunday night.