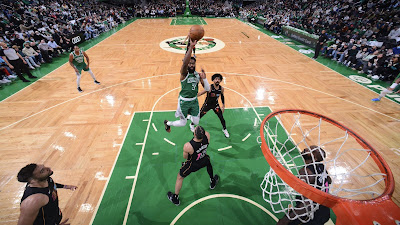 The Celtics cruised past the Miami Heat in convincing fashion with a 122-92 blowout victory Monday night at TD Garden.
Jaylen Brown led all scorers with 29 points on 11-of-19 from the field, while Jayson Tatum added 20 points on 7-of-15 shooting to go along with 12 rebounds.
The All-Star duo have continued to put up big time numbers, as Brown has netted 25 points or more in four consecutive games and Tatum has reached the 20-point mark in his last six straight.
Marcus Smart had 16 points and seven assists in another strong performance as the starting point guard to help the Celtics win four out of their last five outings and give them a 27-25 record on the season.

"We're still working on some things, but I'm very encouraged by the progress of our group," said C's big man Al Horford in his postgame presser after he contributed with 14 points and nine rebounds. "Now we can kind of see what we can do and who we are."

Miami, who have lost two in a row, were without Jimmy Butler (toe), Kyle Lowry (personal) and P.J. Tucker (knee).
Max Strus finished with a team-high 27 points on 9-of-17 from deep, as Caleb Martin had 14 points. Tyler Herro struggled with a 5-of-18 shooting display to score only 13 points off the bench and Bam Adebayo chipped in 12 points, five rebounds and five assists in the loss for the 32-19 Heat.
The Celtics jumped out to a 21-7 advantage to open the game -- hitting eight of their first 11 shot attempts to get off to a great start -- while holding Miami to just 6-of-21 from the floor in the first quarter.
The Heat used an 18-5 run to knot it all up 32-32, before Boston scored seven unanswered points as part of a 22-13 spurt to end the first half and take a 54-45 lead into the break.
Celtics coach Ime Udoka spoke about what changed following the timeout he called once the game was all tied up in the second period.

"We got our physicality back," Udoka said. "Credit to our guys. They bounced back and finished out the half, then carried it over to the third quarter."

Boston outscored the Heat 40-25 in the third quarter to take a 94-70 edge into the final frame, where they led by as many as 32 points on their way to an impressive home win.
Despite the Heat being shorthanded, the Celtics held them to 39.1% shooting and forced 19 turnovers to convert them into 24 points.

"I love it, especially with the adversity that we've been dealing with this whole season -- the up and down, not being consistent," Smart said in his postgame comments. "For us to finally make start to make that walk in the right direction, it's big for us. It's something that we needed. It's happening at the right time for us."

The Celtics will look to win their third in a row when they host the Charlotte Hornets (28-23) Wednesday night at the Garden.