Jaylen Brown reportedly could 'seek a move' this offseason 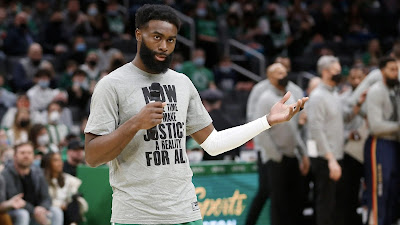 According to Steve Bulpett of Heavy.com, the Celtics could be forced to make a decision to deal Jaylen Brown as soon as this summer.
Despite the C's having a 4-1 record over their last five games and Brown playing some of his best basketball as of late, the veteran wing could request to be traded this offseason if he feels like the team isn't heading in the right direction.
In a report by Bulpett, where he sites multiple sources, "Brown could be the one to acknowledge that the mix isn't right and seek a move," in the coming months.
While Brad Stevens isn't currently shopping Brown, as the February 10 NBA trade deadline is quickly approaching, if a deal does present itself -- "you'd better be ready to move fast," Bulpett writes.
Brown, who's coming off an All-Star appearance during the 2020-21 campaign, is averaging 24.4 points, 6.6 rebounds, and 3.0 assists while shooting 45.9% from the field and 36.1% from behind the arc so far this season. But over the past four outings, Brown's scoring has bumped up to 29.0 points and 52.5% shooting as the Celtics have played with a much better pace and are moving the ball better overall.
Opponents have clearly taken notice on the recent play of Brown and the Celtics, as one anonymous coach explained to Bulpett and Heavy.com:

"This is more like they want to play. This is more like what Brad [Stevens] was trying to get out of them last year. But when it was going bad, it was really hard to watch. It seemed like Brown was feeding off Tatum holding it. Like, Brown goes, 'Ah, screw it. Tatum's held it three straight times. Now if I get the ball, I'm shooting no matter what.' That just kills what you're trying to do as a team. You can see it happening.
"But if they can get it together and start playing the right way, I mean, no one denies the talent that's there."

With the Celtics at 27-25, they are still in "Play-In" territory and lingering around .500 for nearly two straight seasons, there's no doubt that a move or two would have to be made to get more talent to surround Brown and Jayson Tatum so they don't risk having to lose one of their young stars.
Brown is set to make $28.7 million and $30.7 million in each of the next two seasons following this one, which is a bargain compared to what other contracts look like when it comes to some from that 2016 draft class -- something to consider when you factor how the Celtics have faired since their last trip to the Eastern Conference Finals nearly two years ago.
Joel Pavón
Follow @Joe1_CSP