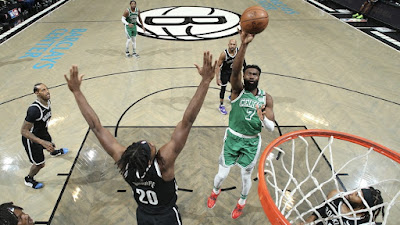 The Celtics once again took advantage of a team being shorthanded, beating the star-less Brooklyn Nets at the Barclays Center 126-91 Tuesday night for their season-best sixth straight win.
Jaylen Brown dished out a game-high nine assists, as he and Marcus Smart each scored 22 points respectively, while the point guard also hit 6-of-13 from behind the 3-point arc. Jayson Tatum had 19 points and Robert Williams recorded another double-double of 12 points, 11 rebounds.
The Celtics jumped out to a 28-2 start in the first seven minutes of the first quarter and never looked back, as they now find themselves with the seventh best record in the East at 31-25 -- moving past the Nets, who were without Kevin Durant, James Harden and Kyrie Irving in their ninth consecutive loss.

"I don't know how often or if we've ever been so good to start like that before but it felt good," Brown said in postgame presser. "We knew some of those guys were out. We wanted to just to take care of business early. We didn't want to play around and give them confidence and let them linger into the game."

Jevon Carter led Brooklyn with 21 points off the bench, after no starter had more than six points. Cam Thomas and James Johnson each netted 17 points apiece for the Nets, who fell to 29-25 on the year.
Brooklyn is 2-10 since Durant went down back in mid-January with an MCL sprain in his left knee and 5-13 overall when the All-Star has not been in the lineup.
The Celtics used two separate 14-0 runs, while the Nets missed their first 14 shots to open the game. Boston led 67-39, which was their largest margin of the half following a Smart 3 with 1:18 left in the second quarter.

"We had a game plan that we wanted to go into and we followed it to the T," Smart said during his postgame comments.

No starter for Boston played more than 28 minutes, but they combined for 84 points on 33-of-56 shooting from the field and 10-of-17 from 3-point territory, to go along with 29 rebounds and 24 assists. The Nets starting five was held to 21 points on 10-of-36 made attempts from the floor, including going 1-of-12 from deep.

"I mentioned it the other night: it feels at times like we engulf teams and kinda suffocate them with our size and length and some of those things," said C's coach Ime Udoka on his team's defense as of late.

After a successful 3-0 road trip, the Celtics will return home to TD Garden and host the Denver Nuggets (30-24) Friday night. Tip-off is at 7:30 on NBA TV.