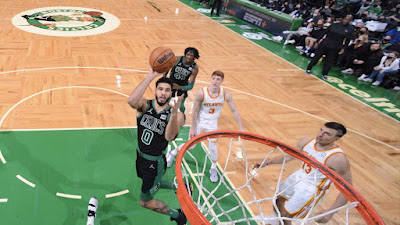 The Celtics played their traditional Super Bowl matinee game, as they rallied from another double-digit deficit to beat the Atlanta Hawks 105-95 Sunday afternoon at TD Garden.
Jayson Tatum led all scorers with 38 points on 13-of-27 shooting and 10 rebounds, while Jaylen Brown added 17 points, nine rebounds in the C's eighth straight win.

Robert Williams had 10 points, 14 rebounds to record his fourth consecutive double-double and Marcus Smart netted 13 points to go along with seven assists.
Trae Young had 30 points and 10 assists to lead Atlanta. Bogdan Bogdanovic finished with 26 points and Clint Capela hulled down 17 rebounds for the Hawks (26-30), who have lost four of their last five games.
The Celtics trailed 55-45 at the break before using a 12-2 run to start the second half and shot 13-of-18 the rest of the third. Tatum hit back-to-back 3s and added a dunk with three seconds left to put Boston up 87-78 heading into the final frame.
The Hawks went on a 6-2 run to get within four in the fourth, but Tatum responded with a turnaround jumper and a 3 to push the Celtics lead back up 94-84 with 6:32 left to play.
Despite only scoring 18 points in the fourth quarter, Boston held the Hawks to 17 as they finally got their revenge after losing the first two meetings against Atlanta this season. The C's remain undefeated in the month of February and are now 26-13 all-time on Super Sunday.

"We definitely lost some games we felt like we shouldn't have lost early in the season. Now we get the chance to play some of these teams again and we're looking to pull out some wins," Brown said in his postgame comments. "We had a lot of guys making plays right now and that's what we need to do in the fourth quarter. We've been finding ways to win -- defensively, timely baskets and we've been sealing out games."

The Celtics currently have the sixth best record in the East at 33-25 when they head to Philadelphia and face the fifth place 76ers (34-23) Tuesday night. TNT will have the tip-off at 7:30 PM ET.