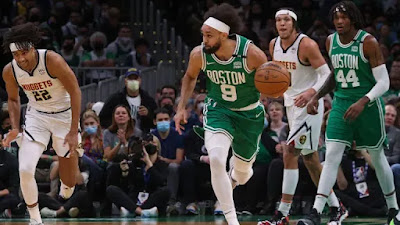 The red-hot Celtics haven't lost a game in the month of February, as they beat the Denver Nuggets 108-102 at TD Garden Friday night for their seventh straight victory.
Jayson Tatum led all scorers with 24 points on 8-of-19 shooting, while Marcus Smart finished with 22 points, seven assists and five steals, to go along with two clutch free throws in the final seconds to help extend the C's longest win streak of the season.
Robert Williams added 15 points, 16 rebounds and three blocks to notch a third consecutive double-double -- his fifth over the last eight games. Newcomer Derrick White also had 15 points and six rebounds off the bench in his Celtics debut after being acquired from the San Antonio Spurs in a trade-deadline deal.

"It was all pretty crazy. I was pretty shocked. I didn't see it coming," White said in his postgame presser of being informed of the trade. "But as soon as I got here, I got excited."

White made an immediate impact when he checked in at the 4:35 mark of the first period and less than a minute later led a fast break after a Smart steal to hit Jaylen Brown (12 points, seven rebounds) with a pass for an easy layup that got the Garden faithful on their feet.
Boston's head coach Ime Udoka spoke about how White's performance on both ends of the floor is one of the many things he brings as a combo guard who provides floor spacing and energy that will fit in well with this current group.

"He did what he's done and what I've seen in the past," Udoka said. "You don't miss a beat with him out there."

Nikola Jokic, the reigning league MVP led the Nuggets with a triple-double of 23 points, 16 rebounds and 11 assists, but also had nine turnovers in the loss. Aaron Gordon chipped in 17 points and Facundo Campazzo netted 14 off the bench for Denver, who are 30-25 on the season.
The Celtics trailed by as many as 11 in the first quarter and were down 60-51 at the break, before using a 15-2 run to open up the second half to grab a 69-65 lead. The Nuggets responded with a 14-7 spurt to close the third quarter and take a 79-76 advantage into the final frame.
A Williams block followed by an alley-oop slam on the other end put the Celtics up for good (91-90) with just over seven minutes left to play.
Boston was up 100-97 with 55.1 seconds remaining when Smart converted on two crucial free throws to increase the lead to five.

"We just stayed with it," Smart said during his postgame comments. "We didn't let anything fluster us. We just kept trusting in one another."