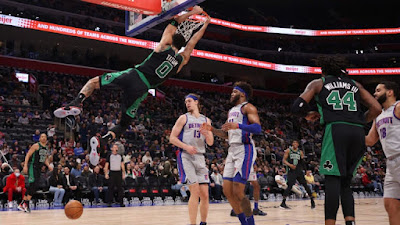 The Celtics never trailed once, as they cruised past the Detroit Pistons 102-93 Friday night at Little Caesars Arena.
It was the first meeting between both teams where Jayson Tatum led all scorers with 24 points, to go along with nine rebounds, while Jaylen Brown added 13 points and seven rebounds to give the C's their fourth straight win -- the longest of the season.
Josh Richardson had 12 points off the bench and Robert Williams notched a double-double of 11 points, 11 rebounds, as well as having five blocks.

"I just go back to us being locked in," Williams said in his postgame presser. "We've got great scorers, most people on our team can score but when we're locked in defensively and we cover for each other, I feel like that's when we're playing our best."

The Pistons were held to 34-of-104 shooting from the field, connecting on only 32.7% of their attempts in a horrendous display of offense.

"We're coming out with the right focus from the start," Boston coach Ime Udoka said. "We guarded extremely well for most of the game."

Hamidou Diallo finished with 21 points and 14 rebounds while Saddiq Bey also netted 21 points for the Pistons, who are now 12-40 on the season after hitting 18-of-59 shots in the paint. Jerami Grant was one of those that struggled from the field, scoring 10 points on 3-of-12 attempts.
The Celtics had a 46-31 advantage at intermission, holding Detroit to a season-low point total in the first half.

"We could have kept them in the 20s other than for a few mistakes there," Udoka said. "We were making it tough on Grant and Bey and some of those guys early. Our carryover is good, our physicality has been there and we're kind of buying into that defensive mentality and making it hard on times every night."

Tatum had a 19-point third quarter that essentially put the game out of reach. According to the now third-time All-Star, former Celtics assistant coach, Jerome Allen -- a member of the Pistons' coaching staff -- was trash talking the 23-year-old forward about only have five points coming out of halftime.

"He was like, 'Yo, you might as well put a coach's polo on," Tatum recalled during his postgame comments about what Allen told him. "I said 'alright, I got something for you.'"

Boston was up 78-56 heading into the final frame, taking full advantage of the Pistons playing on a second night of a back-to-back, following a loss to the Minnesota Timberwolves on Thursday.
The Celtics at 29-25 have won 11 of their last 14, as they'll travel to Orlando to face the Magic (12-41) Sunday night.

Boston led by as many as 24 points, while shooting 45.1% from the floor and finished with 23 assists on 37 made baskets.
Joel Pavón
Follow @Joe1_CSP