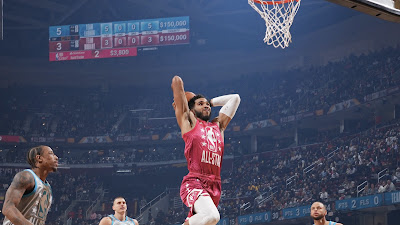 The 2022 NBA All-Star Game was one for the ages, as Team LeBron beat Team Durant 163-160 on a James game-winning 3 at the buzzer.
Jayson Tatum made his third straight All-Star appearance, subbing in for Kevin Durant (due to injury) as a starter for the second straight year in row. The Celtics forward finished with eight points, four rebounds and five assists in 20 minutes of action -- including sitting out the entire fourth quarter.
The 23-year old was interviewed during the first half by TNT's Reggie Miller and was asked about the Celtics recent surge, where the team has won 11 of their last 13 games, to which Tatum spoke about the roster being healthy as the main reason for their play as of late.

"First and foremost, it's health. Just in the last month and a half is the healthiest we've been all season. At first, we had a new coach, new staff, new group of guys. We didn't gel as fast as people probably expected. But it's a long season. As long as we click at the right time, everything will work itself out."

This is LeBron James' fifth straight All-Star win, as the team he's drafted has gone 5-0 since the league has implemented the new format.
Stephen Curry won his first All-Star MVP Award (named after the late Kobe Bryant) after netting a game-high 50 points on 17-of-30 shooting and hitting a record 16-of-27 from deep -- beating his. The Warriors guard was only two points shy of the all-time record that Anthony Davis reached back in 2017 with 52.
The Celtics (34-26) will resume play on Thursday when they face the Nets (31-28) in Brooklyn. TNT will have the tip-off at 7:30 PM ET.
Joel Pavón
Follow @Joe1_CSP