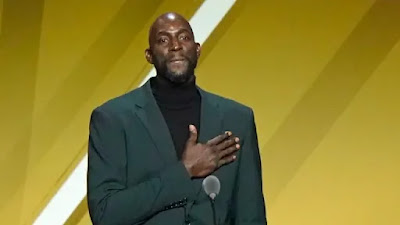 The Celtics unveiled their 75th Anniversary Team this week and it wasn't a surprise to see one Hall-of-Famer by the name of Kevin Garnett to made the 15-man list.
The former 2004 league MVP, who was also selected to the NBA's 75th Anniversary squad back in October, spoke to the Boston media Thursday afternoon ahead of the C's officially retiring his jersey next month.
Garnett will be among an elite group of players in Celtics history to have their number raised to the rafters at TD Garden, come March 13 following a home game against the Dallas Mavericks. The hope is that perhaps that No. 5 or any of those other iconic digits that hang well above the parquet could inspire the next generations of players that put on the green and white -- just as much as they did for KG.

"That was my driving force," Garnett said in his press conference recalling when he'd look up at the historic banners. "When I came to Boston, I wanted to be a player that was remembered for playing in Boston. And I went out every night that I suited up, and I played like that. But every morning I would come into practice and I would look up at the banners and I would just look at them and I would go through each one."

It was nearly 15 years ago when Garnett arrived in Boston with a sole purpose of winning a championship after over a decade of coming up short with the Minnesota Timberwolves. The storied Celtics were also in search of the same goal after not hoisting the Larry O'Brien trophy since 1986. It became clear that it was time for both parties to join forces, something that seemed destined and long overdue once it finally happened.
Garnett not only helped accomplish ending a 22-year drought for a franchise yearning for a 17th championship banner that took less than 12 months to win, but he'd finally gotten the proverbial monkey off his back of capturing that elusive NBA title -- the first and only ring of his illustrious career.
Still, for six seasons (2007-13) Garnett proved why he is considered one of the game's greatest of all-time by putting up 15.7 points, 8.3 rebounds, 2.7 assists, 1.2 steals, and 1.0 blocks per contest, while also winning 2008 Defensive Player of the Year honors, to go along with five All-Star appearances, an All-NBA nod, and four All-Defensive Team selections. KG has earned the right to be called a Celtics legend just as those hanging in the rafters before him.

"I'm super honored that the Celtics recognized me," Garnett said of his jersey being retired. "This is a great honor for not just me, but my family. And obviously I know the Celtics' history. Coming into being a Celtic, I was always conscious of the ones that have come before me, laid the path before me. The Bill Russells and Satch Sanders' and JoJo Whites. I'm aware of the history of the Celtics and the company and all the retired numbers. I haven't had a chance to get lost in it, but I'm just honored. It's an overwhelming feeling and I'm just super honored to be a part of the Celtic family and this great tradition."

As someone who clearly understood the culture in Boston, especially when it came to the Celtics fans, Garnett "never went at the game with less than 100 percent" effort -- something that helped establish a lasting legacy.

"I heard Larry Bird say one time in his early years in Boston that the reason why he loved playing in front of the fans in Boston is because you couldn't fake them," Garnett said. "You couldn't fool the fans. They knew when you was playing hard. They knew when you were giving your all. They have a sense of basketball history, and they have high basketball IQs. They cared and I never forgot that."

Garnett's intensity, which was just as important as his effort -- could not be matched. Whether it was banging his chest to show he had heart or pounding his head on the basket support to display he would "do anything for this game" right before tip-off, Celtics fans still appreciate KG even nearly a decade later since he last wore the green and white.

"I never wanted to come in and be cool, I didn't want to be calm," Garnett said of the "temperature" that he brought onto the court prior to every game. "I wanted to be under control, but I wanted to be electric. I wanted to win every game and I wanted everybody who I was playing against to know that. I guess the fans resonated with that and to this day, fans come up to me, they dap me, they express their appreciation for hard work and passion. At the end of the day, man, that's all you can ask for. So I'm grateful for that. That's what I think is the connection between me and the fans; that they connected with me from day one of stepping on the court."

Come next month Garnett will get to step onto the Garden parquet one more time to raise his No. 5 up into the rafter to further cement his Celtic legacy and join those who always inspired him while in Boston.
Joel Pavón
Follow @Joe1_CSP