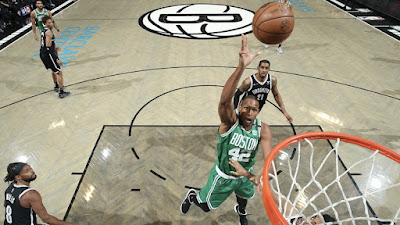 The Celtics showed no signs of an All-Star break hangover, as they beat the new look Brooklyn Nets 129-106 Thursday night at the Barclays Center.
Jayson Tatum picked up where he left off last week by scoring a game-high 30 points on 10-of-20 shooting, including 4-of-9 from deep, to go along with seven rebounds and four assists.
The 23-year-old forward also had multiple highlights, such as dunking over two defenders late in the second quarter, something Tatum deemed as necessary from time to time.

"I've had my fair share of highlights and sometimes I've got to remind people that I can still do that," the All-Star forward said in his postgame presser. "I don't do it as often, but in the right moment I can still do those things."

Jaylen Brow had 18 points (6-of-12 from the field), six assists, while Marcus Smart was back in the lineup with 15 points and six assists. Robert Williams notched another double-double of 12 points and 11 rebounds in his return from a sore right calf to help the Celtics get their 12th win in the last 14 outings.

"We feel like we found something in the past few weeks and it's just good that after the break we came out and there was no steps back," Al Horford said in his postgame comments after finishing with 11 points, 13 rebounds, two steals and two blocks.

Seth Curry led the Nets with 22 points, seven rebounds, while Bruce Brown chipped in 15 points and five assists. Kessler Edwards netted 13 points off the bench for Brooklyn, who have lost 13 of their last 15 games and are now eighth in the East at 31-29.
Kevin Durant (knee), Ben Simmons and Goran Dragic all watched from the bench, while Kyrie Irving was not in attendance due to not being vaccinated.
The Celtics got off to a 22-10 start in the first quarter, similar to how they began that also led to their blowout victory over Brooklyn back on February 8.
Derrick White (13 points, five rebounds) pushed the lead 48-26 early in the second period following a three-point play, before the Nets got within striking distance to make it 67-52 at the break.
Tatum's 11-point third quarter put Boston ahead 97-74 entering the final frame and the C's were up by as many as 29 in the fourth.
The Nets never led once, shooting 41.5% from the field and were held to 7-of-29 from behind the 3-point arc.
The Celtics (35-26), who hit 54.1% of their attempts and were 17-of-42 from 3, will head to Detroit Saturday and take on the Pistons (14-45) in a possible revenge game after suffering the only loss in the month of February at the hands of the second to worst team record-wise in the conference just prior to the All-Star break.

Boston outrebounded the Nets 48-38, while finishing with 28 assists on 46 made baskets. The Celtics also outscored Brooklyn in the paint 54-46.
Joel Pavón
Follow @Joe1_CSP