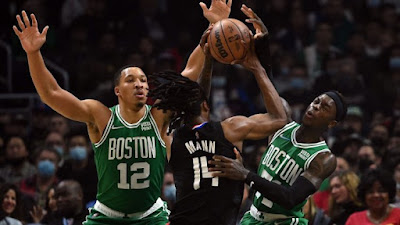 Trade talk are heating up with the NBA deadline two days away and Dennis Schröder looks like he may be on the move.
The Celtics reportedly offered to trade the veteran to the Milwaukee Bucks in exchange for Donte DiVincenzo this past weekend, according to The Athletic.
The Bucks countered when they asked for Grant Williams instead, per The Athletic, to which Boston "balked" at the offer. However, the two teams "continue to explore frameworks that include Williams" ahead of Thursday's deadline based on the report.
On Monday, NBA insider Jackie MacMullan revealed that the Celtics are considering moving Williams, even though the 23-year old big man is shooting a team-best 42.8% from behind the arc.

"The one thing I've heard that I don't like is the possibility of (the Celtics) moving Grant Williams," MacMullan said on The Ringer's Bill Simmons Podcast.

Williams is averaging 7.3 points and 3.3 rebounds per game while being tied for seventh in the league when it comes to 3-point percentage. The C's also picked up his team option for next season, meaning he'll carry just a $4.3 million cap hit for the 2022-23 campaign.
Though Williams' contract is a valuable trade chip, his 3-point shooting also makes him that much more appealing for teams interested in the undersized forward.

"I think Grant Williams has had a really good year," MacMullan added on Simmons' podcast. "He's four inches too short but he's the only guy who is hitting 3s for you. You better get a shooter back if you are going to trade Grant Williams."

Meanwhile, DiVincenzo would be a solid fit in Boston despite him just hitting 28.6% from deep this season in limited playing time. He averaged 10.4 points per contest a year ago on 37.9% 3-point shooting and is on favorable contract -- with two years, $11.2 million remaining on his current deal.
While a Schröder for a DiVincenzo swap would save the Celtics roughly $1.8 million in cap space, if the Bucks also want Williams, C's president of basketball operations Brad Stevens could counter offer with a draft pick, veteran guard George Hill (38% 3-point shooter) and wing Jordan Nwora or a combination of all three.
Stevens may just hold out on a deal with the Bucks, as teams like the Cavaliers and Bulls have also shown interest in Schröder, who is averaging 14.4 points and 4.3 assists per game in mainly an off-the bench role. The German guard dropped 22 points Sunday night in the Celtics' win over the Orlando Magic.
It's also good to note that due to Jaylen Brown not getting an All-Star nod (for now), the C's would essentially be only just $1 million over the luxury tax, meaning Schröder may also stay put past Thursday's deadline.
Stay tuned.
Joel Pavón
Follow @Joe1_CSP