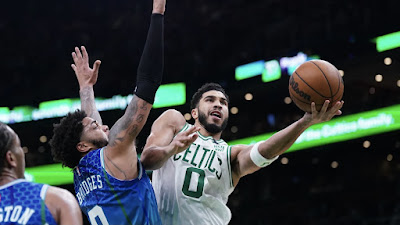 Josh Richardson led the way with 23 points to help the Celtics beat the Charlotte Hornets 113-107 Wednesday night at TD Garden.
The veteran guard went 6-of-8 from behind the arc, while Marcus Smart finished with 22 points and six assists. Jayson Tatum added 19 points, nine assists and Jaylen Brown chipped in 15 points for the C's, who have won three straight to tie a season-high and are now 28-25 on the year.

"We've dealt with adversity and not always ended up the best," Celtics coach Ime Udoka said. "Tonight we handled it well. We were able to make big plays down the stretch."

Boston nearly gave up another double-digit lead late in the fourth quarter, but were able to overcome LaMelo Ball netting a career-best 38 points on 12-of-24 shooting, to go along with nine assists.
The Hornets were without Gordon Hayward after he cleared NBA Health and Safety Protocols, but did not travel with the team.
The other former Celtic Terry Rozier scored 23 points, P.J. Washington had 16 points and Kelly Oubre Jr. contributed with 15 points off the bench for Charlotte -- who are only a half-game ahead of the C's in the standings as the seventh seed at 28-24.
In a tight first half, Boston was only up 54-53 at the break, before Brown hit a buzzer beating jumper from the foul line to give the Celtics a 88-78 advantage as part of an 18-8 run to end the third quarter.
Boston led 93-83 following Richardson's sixth 3-pointer to start the fourth period, but the Hornets used an 18-10 run -- which included three made free throws by Ball after a technical foul was called on Tatum -- to get within 103-101 with 2:10 left.
Rozier's top of the key 3 tied it up 107-107 a minute later, but that would be Charlotte's last made field goal, as Tatum sank two free throws and Robert Williams (10 points, eight rebounds) blocked Washington's 3-point attempt. Smart iced the win with two more free throws in the final 15.6 seconds.

"It's just believing in everyone and trusting in the system that we have on both ends of the floor," Smart said in postgame presser of Boston's victory. "It's trusting the game plan, the scheme and trusting our instincts."

"Guys coming out of their comfort zone and playing on a string if we want to compete," Richardson said in his postgame comments of the team's current win streak.

The Celtics will look to win four in a row for the first time this season when they head to Detroit to face the Pistons (12-38) Friday night.

Boston outscored the Pistons 44-42 in the paint, but were outrebounded 46-42 and committed 19 turnovers.
Joel Pavón
Follow @Joe1_CSP