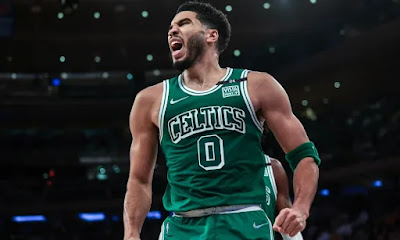 Celtics forward Jayson Tatum has been selected to his third straight All-Star team, as the reserves for both the East and West were announced Thursday night during NBA Tip-Off on TNT.
The 23-year-old forward is not having his best shooting year percentage-wise despite averaging 25.9 points, (ninth best in the league), as Tatum is hitting a career-low 43% from the field and 32.7% from deep. But he is grabbing a career-best 8.4 rebounds to go along with dishing out 4.1 assists per game. The Celtics currently have the ninth best record in the Eastern Conference at 28-25 as the league's trade deadline is less than a week away.

"It's a goal of mine to go every year," Tatum said during Friday's post shootaround presser in Detroit. "Everyone said congrats and stuff, I just told them I appreciate those guys because this is a team sport and I couldn't have done it by myself."

The Celtics are coming off a three-game win streak and have won 10 of their last 14 games overall, while having the NBA's best defensive rating since Christmas. Coach Ime Udoka spoke about Tatum's third selection and how it doesn't come as a surprise to him.

"That's a standard he's set for him and a goal he should achieve every year he's in the league in my opinion and as well as All-NBA and eventually be an MVP," said Udoka during his Zoom presser Friday. "We're all happy for him obviously."

Jaylen Brown was not selected after coming off his first All-Star appearance a season ago. The Celtics wing missed 10 games earlier in the year due to a hamstring injury and additionally the team hovering around .500 still 53 games in, didn't help Brown make a case for his second nod.

"I might text Adam Silver and see what we can do," said Tatum when asked about making a possible plea for his teammate Brown and his All-Star chances.

Meanwhile as it stands, the Eastern Conference All-Star starters include Trae Young, DeMar DeRozan, Joel Embiid, Giannis Antetounmpo, and Kevin Durant. Joining Tatum off the bench are Fred VanVleet, who's only the fourth undrafted All-Star ever, Zach LaVine, James Harden, Jimmy Butler, Khris Middleton, and Darius Garland.
However, since Durant is currently out due to a knee injury, he'll be sidelined for the All-Star game, which likely means Tatum -- the fourth vote earner among frontcourt players in the East -- will probably start in his place.
No word who's going to take the last reserve slot, but Durant and LeBron James will draft their teams next week live on TNT before the All-Star game tips-off Sunday, February 20.

A complete list of this year’s #NBAAllStar selections: pic.twitter.com/vSBNMVkas6