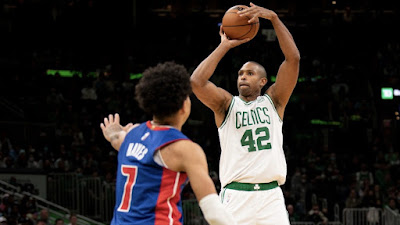 The Celtics were looking to head into the All-Star break on a high note, as they fell to the Detroit Pistons at TD Garden 112-111 Wednesday night.
Jerami Grant hit the winning basket with 19.6 seconds left to snap Boston's nine-game win streak and Detroit's eight-game skid.
Jayson Tatum, who missed a 20-footer as time expired that would have given the Celtics its 10th straight win, had 22 points on 7-of-15 shooting and five assists.
Jaylen Brown led all scorers with 31 points while making 12-of-21 shots, including going 3-of-6 from deep, to go along with six assists. Al Horford finished with 19 points, seven rebounds and seven assists, while Grant Williams added 17 points netting 4-of-7 from behind the arc.

"They came to play. They were the more deserving team tonight," said Brown in his postgame presser.

The Celtics, playing on a second night of a back-to-back, were without Robert Williams (sore calf) for a consecutive game and Marcus Smart -- who sustained an ankle injury in the second quarter of Tuesday's blowout win over the Philadelphia 76ers.
Grant led the 13-45 Pistons with 24 points, as Saddiq Bey (11 rebounds, six assists) and Cade Cunningham (eight rebounds, six assists) each had 20 points respectively. Former Celtic Kelly Olynyk chipped in 15 points off the bench for Detroit.

"It definitely leaves a bad taste in your mouth heading into the break," said Brown of the loss. "We knew not to be surprised. I think Detroit played fantastic. I think we got their best shot tonight."

Despite the Celtics making 54.4% of their field goal attempts and 13-of-32 (40.6%) from 3-point territory, they were outrebounded 47-30 and committed 17 turnovers that Detroit converted into 23 points.
Boston barely held on to a two-point advantage heading into the second quarter and were ahead 52-48 at the break. The Pistons grabbed their first lead of the night on a Cunningham 3 with 10:28 left in the third. The rest of the period featured 12 lead changes and the Celtics trailed 84-83 to start the final frame.
In a tight fourth quarter, Boston led by as many as eight -- the largest of the night (106-98) with 4:25 left to play following a pair of made free throws and a dunk by Tatum. The Pistons responded with a 12-0 run to take a 110-108 lead in the final 42.8 seconds.
Horford hit a go-ahead 3 with 32.3 seconds remaining, before Grant -- went 5-for-5 with 11 points in the fourth -- made a contested 10-footer in the paint, which would be the game winner on the very next possession, to give Detroit only its fifth win on the road all season.

The Celtics are winners of 11 out of their last 13 and will return from the All-Star break with a record of 34-26 (sixth in the East), when they travel to Brooklyn to take on the Nets (31-28) next Thursday night. TNT will have the tip-off at 7:30 PM.