Jayson Tatum thought about 'making the All-Star game every day,' making it changed everything 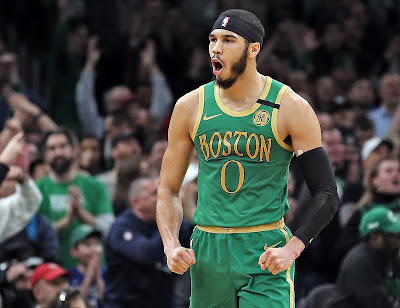 Before the 2019-2020 NBA season came to a grinding halt, Celtics All-Star Jayson Tatum was emerging into one of the league's most prolific scorers.

Averaging 30.7 points while shooting at a 49.4 percent clip to go with 7.9 rebounds and 3.2 assists, Tatum earned February's Eastern Conference Player of the Month  honors by a landslide. He then followed it up with a pair of 30-plus point performances in his last four outings before Jazz center Rudy Gobert tested positive for COVID-19, forcing the league to suspend its season indefinitely.

Tatum, who joined CLNS Media Jeff Goodman's Good & Plenty Podcast, was asked about his impressive month and what triggered the third-year forward to play at such a high level. Tatum credited his All-Star selection as the crucial turning point, it was a goal he obsessed over since the start of the regular season.


"Early in the season, I put so much pressure on myself and mentally -- obviously, I wanted to win," Tatum said. "I wanted us to be a really good team but I also thought about making the All-Star game every day. Every time I had a bad game, I remember, I would text Drew (Hanlen, Celtics skills coach), 'Drew, I don't think I'm going to make it anymore' and he'd be like, "bro, relax." And then I'd have a good game, I'd be like, 'bro, I think I'm a make it.'"

Hanlen, who watched Tatum go through his ups and downs throughout the season, received a text on the night of Nov. 11 when Tatum was at his lowest. The Celtics' rising star found himself on the wrong end of history against the Dallas Mavericks where he went 1-for-18 from the floor.

Tatum's 5.6 percent is the lowest ever recorded by a player attempting 18 shots or more shots in a single game.


"When I went 1-for-18, I was like, 'everybody is going to think about this one. I'm not going to make it,'" Tatum said. "And it was like the weight of the world was lifted off my shoulders when I found out and kind of ever since then I've played a lot more relaxed."

Tatum also added that the death of Kobe Bryant, a mentor and friend of Tatum, also played a part in his newfound level of focus -- one that was intertwined with his All-Star nod; he thinks of both as contributing factors.

The NBA All-Star reserves were announced Jan. 30; two days before Tatum's month of dominance -- where he scored 28 or more points in nine of 12 games, including a career-high 41-point masterpiece in a double-overtime 141-133 thrilling victory over the Clippers just before the All-Star break.

Now, Tatum finds solace in being around his family during such a difficult time. He opened up about how challenging it was to not see his son Deuce for nearly a week as he and his teammates waited for their COVID-19 test results before ultimately returning to their homes.

Tatum is hopeful the regular season will resume at some point but is also urging young folks to stay safe and to take all necessary precautions to avoid spreading the coronavirus.


"It's frustrating but it's not the worst thing in the world," Tatum said. "Just stay at home. If you got food and a TV and WiFi; that's all you need, especially if you're my age and you don't have any kids, just stay at home. You're making it harder for everybody else and you may be prolonging how long this is going on."

Click the player below to hear Tatum's interview in its entirety.