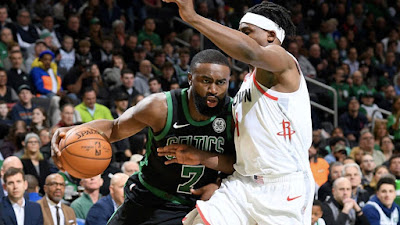 In a nationally televised primetime showdown, the Celtics looked to avenge a loss to the Rockets from a little more than two weeks ago where former league MVP James Harden led all scorers with 42 points.

This time around Harden was held in check for most of the game only to have Russell Westbrook go off for 41 points on 16-of-27 shooting, to go along with 8 rebounds and 5 assists.


"We had a lot of attention on James Harden," said Jaylen Brown, who scored 22 points. "We forgot about the other MVP over there, [Westbrook] came out and asserted his self early, and he took over and dominated this game." [CLNS Media]

Despite the Celtics rallying from a four-point deficit in the final 20 seconds of the fourth quarter and sending the game into overtime on Brown's 3-pointer at the buzzer, after an intentionally missed free throw, they failed to score a basket in the last 2:49 of the extra period -- giving the Rockets a 111-110 win over Boston.

Harden, who leads the NBA in scoring at nearly 35 points per-game, finished with 21 points and was held to 7-of-24 shooting (4-of-17 from 3), including only scoring nine points (3-for-12) in the last 29 minutes, while going scoreless the entire fourth quarter.


"I thought the right team won," said coach Brad Stevens. "Their physical presence is real, so I think that when they turned it up a notch physically in the second half, we got stagnant because they were imposing their will on the game, and they can do that. It's not a knock on our guys necessarily by any means. It's just that that's the strength of their team." [Celtics.com]

The Celtics led by as many as 17 in the first half, before the Rockets used a 13-0 run to grabbed their first lead of the game in the third quarter 66-64. Boston trailed 102-98 after missing nine straight shots in the final frame and Westbrook hit one of two free throws with 19 seconds left.

Smart hit a leaning 3-pointer to cut the Rockets lead to one, but Westbrook got fouled and sunk both free throws to make it 104-101 with 8.1 seconds left in regulation.

Houston sent Tatum to the charity stripe, where the Celtics forward missed the first free throw. He intentionally missed the second -- hitting the front of the rim, as Smart tapped the ball and it found it's way to Brown's hands at the top of the key before hitting the game tying 3-pointer at the buzzer to send the game into overtime, netted up at 104 a piece.


"It's something we practice, if we need to miss a free throw, try to make a play," Tatum said. "JB was in the right spot at the right time and he knocked down a big shot to give us a chance." [Celtics.com]

After leading 110-109 in the extra period, the Celtics would miss their next six shots before Westbrook hit two more free throws and Theis didn't get off a shot in time before  the clock expired, giving the Rockets their fifth straight win over Boston.

The Celtics, winners of 11 of their last 14, shot 39 percent from the field for the game to Houston's 41.8 percent from the floor and were outscored 36-22 in the third quarter (66-54 overall in the second half and overtime).

Kemba Walker missed his fifth straight with a sore left knee and could return on Tuesday when the Celtics host the Brooklyn Nets.

The Celtics (13-42) and Rockets (15-55) combined for 97 attempts from behind the arc and 30 turnovers. Robert Williams III received a coach DNP, despite being cleared to play after being out since Dec. 9 with a hip edema.

Boston at 41-18 missed an opportunity to pull even with the Toronto Raptors (42-17) for the second best record in the Eastern Conference.