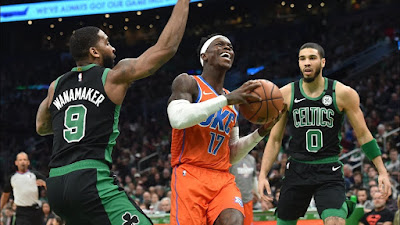 The Celtics bad start to the month of March continued on Sunday afternoon when Dennis Schroder striped Kemba Walker and scored a layup with 8.5 seconds, to give the Oklahoma City Thunder a 105-104 win at TD Garden.

Despite Boston blowing an 18-point lead, Jayson Tatum came up short on a fade-away to win the game on the team's final play and Walker rebounded the ball, but was unable to get off another shot before time expired -- giving the Celtics their fourth straight loss at home, something that they haven't done since 2015.

Gordon Hayward returned after missing the last two games with a knee contusion, as he finished with 24 points, while Tatum added 19 points on 8-of-22 from the field. Marcus Smart also scored 19 to go along with 10 rebounds, as Walker chipped in 14 points and 5 assists for the Celtics, who are now 42-21 on the season.


"That's how the NBA works, "Hayward said. "You go through these runs and stretches where you're feeling really good about yourself and then it's like the world's coming to an end. This is low us. We've got to try to build ourselves up, pry ourselves back out of it."

Chris Paul led Oklahoma City with 28 points and 7 assists, while the hero of the game Schroder scored 27 points off the bench and handed out 6 assists. Danilo Gallinari rounded off the Thunder players in double-digits with 18 points.

Boston used a 19-4 run late in the second quarter and outscored the Thunder 37-23 before Oklahoma City's 7-0 run to close out the half cut the deficit 63-52 at intermission. The Thunder grabbed its first lead of the game midway through the third and it went back and forth throughout the final frame.

The Celtics led 100-99 with less than four minutes left to play, before the Thunder scored the next four points to lead 103-100. Daniel Theis  (11 points, 5 rebounds) got off a dunk and the Celtics followed it up with a Tatum layup to take a 104-103 lead with 40.7 seconds remaining. That would be the last time they scored the rest of the way.


"Most of our good teams go through stretches like this and usually two or three a year, said Celtics coach Brad Stevens. "This is our second one. Hopefully we can nip that in the bud and not have a third one."

The Celtics will head on the road to face the Indiana Pacers on Tuesday before traveling to Milwaukee for a matchup with the league leading Bucks Thursday night.

Boston out-rebounded the Thunder 46-39 and outscored them in the paint 36-18, but Oklahoma City won the battle of the benches outscoring the Celtics second unit 41-17. Jaylen Brown missed his third straight game with a hamstring injury, no word if he'll return to the lineup anytime soon.