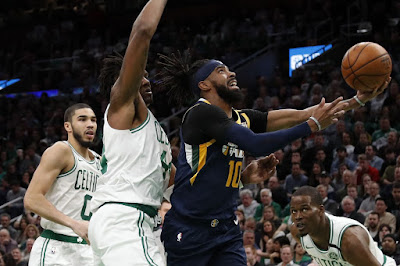 Brad Stevens and the Celtics are in a tough place in the regular season.

They're risking the chance of compromising their current stretch of games for the betterment of the team's long-term goals while Stevens is doing his best to get the most from players outside of his core guys. For the second straight game, Gordon Hayward (knee) and Jaylen Brown (hamstring) weren't in uniform while Kemba Walker played on a minutes restriction and Jayson Tatum had his playing time monitored closely against the Jazz at TD Garden Friday night.

In the end, the Celtics were out-hustled, over-matched and played catch-up for the final three quarters before eventually surrendering a 99-94 loss -- the third of their last four outings. Boston's second unit struggled offensively, its combined 13 points spelled out trouble for the Celtics, a team heavily reliant on its starting core but as Walker's minutes cracked over 20 minutes and Tatum's approached the 30-minute mark, it was too little, too late for Stevens' team to make a late-game comeback.


"We played him a lot on Wednesday," Stevens said of Tatum. "You know, he was sick earlier this week. So, I just wanted to be cognizant of him tonight. I probably would have tried to get him in a little earlier that the 3-minute -- or whenever it was -- when he ultimately checked in. I think he was standing there at 4 (minutes in) but not much earlier. I think we have to be mindful of that.

He's handled everything great. He looks great and we just need him to continue looking great. And we need other guys to continue to get opportunities to step up. I believe that they will."

The Celtics were facing a 14-point deficit when Tatum checked back in during the final frame. His 3-point play pulled Boston to within seven points with under two minutes left before Utah held on to the win.

Walker missed a key layup down the stretch and Brad Wanamaker missed back-to-back 3-point attempts before the Jazz started milking the clock.


"We had a number of good stretches during the game but it wasn't good enough to beat them," Stevens said. "I was really pleased with how we defended for the most part, with the exception of that, you know, maybe a couple of stretches in the middle of the first half but other than that, felt pretty good about how we defended. And we held a good offensive team with good players to 99 (points); we just couldn't score enough to win."

Marcus Smart, who called out his teammates for their lack of effort following the loss, led with a game-high 29 points, including six 3-pointers, Tatum scored 18 and Walker had 13 points, 7 assists in 26:31.

When Stevens' comments about his positive takeaways from the game were relayed to Smart in the Celtics locker room, the longest-tenured Celtic strongly disagreed.


"Our effort was (expletive)," Smart said. "We gave them the first couple of punches and after that our effort died down. We picked it up towards the end but it was too late at that time. We definitely couldn't make shots and they did a great job of coming out and executing all the way through. They out us on our heels so we got to move on from it. The game's over. Give credit to Utah, they came in and did their job, and we've just got to bounce back on Sunday."

While Stevens remains confident that bench guys will eventually step up as they continue to get opportunities, their upcoming schedule isn't going to be easy. Semi Ojeleye, who got the nod Friday, put together a solid night -- he finished with nine points and seven rebounds but Stevens is going to need help in his backcourt while Walker remains on a restriction.

Wanamaker and Romeo Langford seem to be the most likely candidates but have both struggled to find consistency on the offensive end of the floor. Boston will travel to Indianapolis to take on the Pacers Tuesday night before hosting the league-leading Bucks Thursday but will look to grab a win against Oklahoma City beforehand.

No word on which starters will be available against the Thunder at TD Garden Sunday.

The Celtics surrendered 17 3-pointers while the Jazz shot 37.8 percent on 17-of-45 attempts. Boston managed to hold its opponent to under 100 points but Utah shot at a 45 percent clip with Conley, Clarkson and Joe Ingles leading the way -- they combined for 19-of-36, including a perfect 3-of-3 from behind the arc.