Report: NBA games may not resume until mid to late June 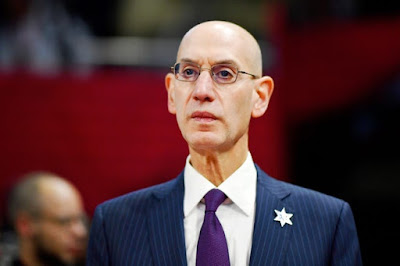 The NBA season may not resume until mid to late June after the CDC (Center for Disease Control and Prevention) has recommended that events of 50 people or more be postponed or cancelled for the next eight weeks.

According to ESPN's Adrian Wojnarowski, owners are looking at a "best case scenario" of resuming games in mid or late June and without fans in attendance.


CDC recommendation of no events of 50-plus people for next two months comes as a number of NBA owners and executives increasingly believe a best case scenario is a mid-to-late June return to play -- with no fans. League's scouting for possible arena dates all the way thru August.
— Adrian Wojnarowski (@wojespn) March 15, 2020


Wojnarowski goes on to write that "fears exist of a season completely lost," but that everyone involved is open to all options at this point.


"For now, there's a working plan that games would return without fans, and teams have been told to search out arena dates well into August for the playoffs, sources said. Teams have been directed to give the league office potential dates at smaller nearby game venues, including team practice facilities, that could spare the use of empty, cavernous arenas and possibly provide backdrops to unique television viewing lines." [ESPN]

The NBA, along with all major sports leagues in North America, have suspended play for at least 30 days, following Rudy Gobert and Donovan Mitchell of the Utah Jazz testing positive for the coronavirus (COVID-19) last week.