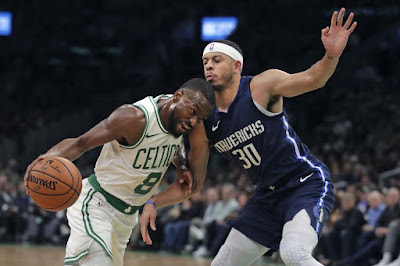 In the Celtics first game since Gordon Hayward fractured his left hand, Kemba Walker and Jaylen Brown once again took on more offensive responsibility, as Boston beat the Dallas Mavericks 116-106 to remain undefeated at TD Garden.

Walker hit three 3-pointers in a span of 1:09 in the fourth quarter and went 8-of-14 from behind the arc overall, to finish with a team-high 29 points, while adding 5 rebounds and 5 assists.


"I was just trying to be aggressive, trying to make the right plays," Walker said. "My shot felt good the whole night. I was just missing them. Then, in the fourth quarter, just naturally, the competitive nature just comes out and I try to do what I can do to put the ball in the basket."

Brown in just his third game back from illness, finished with 25 points on 9-of-16 shooting and 11 rebounds to notch the first double-double of the young season.

At the start of the second quarter, the Celtics announced Hayward underwent successful surgery to repair a fourth metacarpal fracture in his left hand - that he injured in Saturday's win over the Spurs and will now be out approximately six weeks.


"I got word at halftime that surgery went well," Boston coach Brad Stevens said. "We're going to have to find other guys to step up, especially off the bench."

Marcus Smart got the start and continued his hot shooting touch from San Antonio, going 6-of-9 and knocking down four 3-pointers for 17 points and 6 assists, while making life miserable for Kristaps Porzingis (1-of-11 from the floor) on the other end. Daniel Theis chipped in with 11 points and Brad Wanamaker added 10 off the bench for the Celtics, who have now won eight straight since dropping their season opener.

Despite Jayson Tatum's offensive struggles and scoring just five points on 1-of-18 from the field - becoming the third player in NBA history to hit one make on 18 or more shot attempts, he did grab 8 rebounds and dish out 4 assists.

For the Mavericks, Luka Doncic single-handedly kept his team in the game with 34 points, 9 assists and 6 rebounds. Maxi Kleber was the only other starter in double-figures with 15 points and 8 rebounds, while Jalen Brunson and Dwight Powell each contributed with 12 off the bench.

Dallas ended the first half on a 14-2 run to even the score 54-54 at the break before Walker and Doncic's third quarter battle resulted in each scoring 14 points a piece. The Celtics All-Star hit four 3's, while the reigning NBA rookie of the year scored nine of the Mavericks' final 11 points of the period to only trail Boston 84-79 heading into the final frame.

With less than eight minutes left to play, the Mavs grabbed their first lead 88-86, which was short lived, as the Celtics went on a 11-2 run to go ahead 101-94 with 4:11 remaining. Walker hit a 3 and Smart converted a 3-point play to push the lead to double-dights and the Mavs never closed the gap the rest of the way.

The Celtics, who shot 47.7 percent on the night, will look to push their win streak to nine when they host old friend Isaiah Thomas and the Washington Wizards on Wednesday at the Garden.

Boston and the Mavericks each finished with 48 points in the paint, while Dallas out-rebounded the Celtics 57-53. Enes Kanter returned to the lineup for Brad Stevens after missing the last seven straight games. In six minutes of playing time he scored 2 points and grabbed 3 rebounds.