Could Enes Kanter walk this offseason? 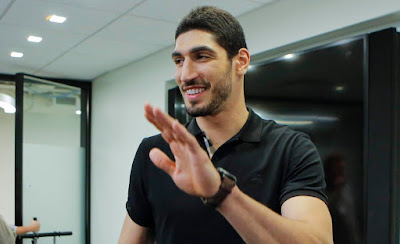 Enes Kanter could be easily looked at as a "journeyman" after playing for four different teams before landing in Boston last summer.

In his ninth year in the NBA, Kanter has enjoyed his role so far with the Celtics, but could he be on the move again come this offseason?

Daniel Theis has clearly been Brad Stevens' center of choice. Theis has averaged 23.8 minutes per game this year - up to 28.2 minutes over the last 10 games - and 31 for the last two contests. Theis' minutes have soared, while Kanter's time has plummeted. The message is clear. If a player doesn't dedicate himself to Brad's constant-movement, switching defensive schemes, his floor time will suffer. That appears to have been Kanter's fate as this season has unfolded.

To Kanter's credit, he has played to - or beyond - what was expected. He is a big that can score and rebound around the hoop, but his defensive work is not always up to Stevens' standards and Kanter, despite his size, can be bullied by a few brutes in around the league.

It just might turn out that Kanter may want more playing time - and perhaps more money. Thus, he may opt out of his $5 million deal for next season and see what is out there for him. While he has been jettisoned by a number of teams, there always seems to be a franchise that wants him. He will turn 28 years old in May and if he can land a multi-year contract with a team that will use what he supplies, Kanter may go for it.

Though the suspension of NBA games may actually be helpful to Kanter if he is healing up from any existing injuries, it has certainly stymied the progression of Celtics second-year-man Robert Williams, who was just returning after being out two month with a hip edema. But as things stand now, Stevens may envision a center rotation of Theis and both Robert and Grant Williams for the near future. That would leave short minutes for Kanter going forward, whenever the season resumes, if at all.