Celtics 114, Pacers 111: Boston holds off Indy in face of adversity 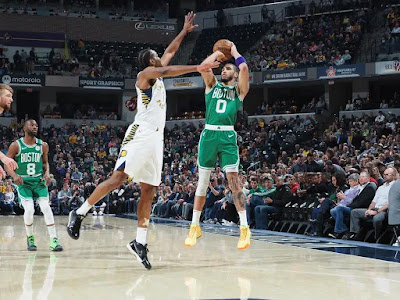 When the Pacers erased a 16-point fourth-quarter deficit, Celtics head coach Brad Stevens relished the fact that his team -- for the third time in their last four games -- just blew another double-digit lead late in the second half.

Victor Oladipo's eight consecutive points in less than one minute pulled Indiana to within three before T.J. Warren's trey found the bottom of the net to tie the game (104) with only three minutes left. The Pacers eventually closed out a 21-2 run and grabbed a three-point lead just before the two-minute mark.

However, this time, unlike the last three times Boston blew a large lead, the Celtics turned adversity into a much-needed win. Daniel Theis' crucial 3-pointer found the bottom of the net to knot things back up (107), Jayson Tatum put the finishing touches on his 30-point performance while the Celtics locked their opponent down defensively -- when they held the Pacers to 1-of-6 from the floor in the final two minutes on their way to a 114-111 win on the road.

For Stevens, whose patience wore thin at times throughout the Celtics' recent stretch, Tuesday's adversity was just what the doctor ordered for his team; a hard-fought win that went down to the wire.

Gordon Hayward stuffed the stat sheet with 27 points, 10 rebounds, 5 assists, two steals and one block, Theis finished with 20 points and Marcus Smart added 16 points to go with his 5 rebounds and 5 assists. All-Star forward Domantas Sabonis (28) and Oladipo combined for 55 points on 22-of-39 from the floor and Warren scored 22 points for the Pacers.

While the Celtics' ongoing pattern of blowing big leads down the stretch continues, their biggest test awaits them Thursday night in Milwaukee. With Jaylen Brown (hamstring) still ruled out, the shorthanded Celtics will look to upset the conference-leading Bucks as they continue to secure playoff positioning in the Eastern Conference.


"We need this. As uncomfortable as it is right now, in the moment, we need it," Stevens said. "We have 18 games left after this. We're far from a finished product but we got to get there quickly, start ascending, you know, too. So it was important to get through a night like tonight. We've been good on the road recently, which is encouraging. But we'll see if we can keep being good on the road, pretty tough place to play Thursday."

With time running out on the Celtics' regular season, its late-game execution will be vital moving forward as Boston gears up for the campaign's final stretch. Habits of squandering double-digit leads, scoring droughts and poor defensive play have exposed the Celtics' shortcomings of late but there's still room for the Celtics to grow, according to Stevens.

In light of Tuesday's win, the Celtics officially clinched the playoffs -- Stevens' sixth consecutive -- against a potential first-round matchup in the Pacers, who currently hold a half-game lead over the sixth-seeded Sixers.

Celtics: Limited themselves to only eight turnovers Tuesday night, they also finished with nine steals (Tatum: 4) and five blocks (Theis: 2).