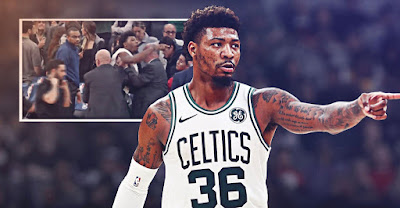 Marcus Smart once again displayed how important he is to this current Celtics roster, following the team's much needed 112-106 win over the Cavaliers in Cleveland on Wednesday night.

Besides snapping a two-game skid, Smart was facing some sort of a punishment in the form of a fine and or suspension after having to be pulled away while ranting to the officials at the conclusion of the Celtics overtime loss to the Brooklyn Nets on Tuesday.

Though nothing has come down yet from the NBA almost 48-hours later, Smart won't be fazed in the least bit if he is suspended or fined. The current Celtics squad is certainly a legitimate title contender, but they lack the internal fire - except for Marcus Smart.

Red Auerbach, Danny Ainge and Larry Bird certainly had it, and so does Marcus Smart - that internal fire that drives the emotions and physical play. Auerbach would punch people out and then accept the consequences, while Ainge was all-emotion on the court and had his share of physical clashes. The same would go for Bird.


Marcus Smart’s heart, tenacity and pride is @celtics to the core. From Bird, to Russell to the Big 3 era, he would’ve been able to fit in with any Celtic team in history.

He is 100% what the pedigree of the Boston Celtics represents!
— Kendrick Perkins (@KendrickPerkins) February 27, 2020


The present crop of Celtics are a finesse group, often lacking physicality. Even the coach Brad Stevens, isn't the most animated guy on the sidelines. It's just not in him. Not so for Smart.


Smart was not happy with the loss - the way it happened - or picking up his fifth and sixth foul that forced him out of the game. And he made the officials aware of his discontentment. Auerbach used to purposely get tossed out of games to fire up his team. Smart's sixth foul was not intentional, and he will pay for his outburst - but in the end, someone has to do it.


Despite his fire on the court, Smart also has a gentle side like when he comforted my great grandson Carson and my daughter Lisa just a few days ago at TD Garden prior to the Celtics matchup against the Rockets. There is more to Smart and you got to love all sides of his unique personality.


When @smart_MS3 heard about Carson’s story on twitter earlier this year, he made sure Carson didn’t feel alone.


Where would the Celtics be without Smart? The hope is that another C's player steps forward and displays that physical and emotional fire we see constantly in Smart. Rookie Grant Williams may evolve into that player, but only time will tell.