Was Danny Ainge the most-despised player in the NBA? 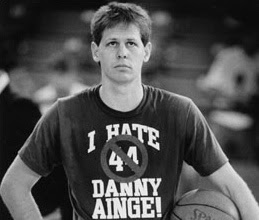 Danny Ainge was a thin 6-foot-5 in the 1980's and looked like the president of your high school science club, but he never backed away from a fight or any type of confrontation. But unless you were a Celtics fan, you probably despised him.

Ainge's most infamous scuffle involved Atlanta Hawks' Tree Rollins, resulting in the "Tree Bites Man" headlines when Rollins chomped down on his jersey number. But Ainge was so hated by opponents, many still think he was the one who did the biting instead of Rollins. There were many dust-ups involving the guy now called "Trader Danny," and many are encapsulated in the video below. Michael Jordan, Isiah Thomas, Joe Dumars, Mario Elie and Sam Cassell are only a few of Ainge's combatants. Take a look.

Ainge may have been hated by most opponents, but he was often praised by those who admired his ferocious competitiveness.

"Ainge is an effort player. There is no better competitor in the game." - Pat Riley

"I wish I had four Danny Ainge's as teammates. With his desire and hustle, we'd never lose a game." - Michael Jordan [Joe Hamelin of the Los Angeles Times]

Love or hate him, you had to admire Danny Ainge's incendiary nature on the court. His more-controlled manner as Celtics president of basketball operations belies the fire that still burns inside him, which is why they should feel so lucky to have him in Boston.