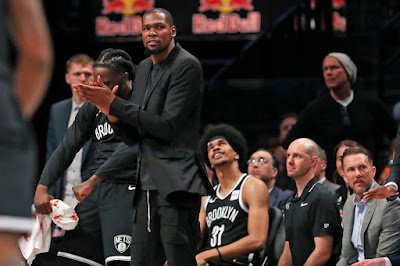 Kevin Durant is among the four Brooklyn Nets players to test positive for the coronavirus (COVID-19).

Durant confirmed the news with Shams Charania of The Athletic on Tuesday afternoon, despite not displaying any noticeable symptoms.


Kevin Durant tested positive for coronavirus, Durant tells @TheAthleticNBA @Stadium. Durant says he is feeling fine: "Everyone be careful, take care of yourself and quarantine. We're going to get through this."
— Shams Charania (@ShamsCharania) March 17, 2020


The Nets confirmed the positive test results, but did not identify any players and that out of the four, only one is exhibiting symptoms. In a statement released by team officials, all four players are in isolation and are undergoing medical treatment by the team's medical staff.


According to Adrian Wojnarowski of ESPN, the one Nets player that had symptoms woke up Tuesday morning experiencing body aches. The team received results earlier today after hiring a private company to conduct the coronavirus test out of pocket last week when they returned from San Francisco, before being scheduled to play against the Golden State Warriors.

ESPN's Dave McMenamin reported that the Los Angeles Lakers will be tested on Wednesday after learning of the Nets' positive tests, as both teams played against each other before the NBA suspended games.

The Nets did not play against the Jazz or Pistons in the two weeks prior to the NBA suspending the season. Other than facing the Lakers on March 10, the Nets were scheduled to play the Warriors two night later, but without fans. Durant was in Los Angeles for the Nets-Lakers game, but did not travel to San Francisco prior to the Nets being scheduled to play his former team.


"I saw that news,'' Warriors coach Steve Kerr said of the Nets' positive tests. "I'm hoping none of our players went and hung out with guys the night before our game. I don't know if that's the case or not." [ESPN]

Following the Nets' announcement on Tuesday, New York City Mayor Bill de Blasio called out the NBA for all teams' ability to get tested for the coronavirus, while the tests are not available to so many others.


We wish them a speedy recovery. But, with all due respect, an entire NBA team should NOT get tested for COVID-19 while there are critically ill patients waiting to be tested.