Paul Pierce wanted to be drafted by L.A. Clippers in 1998 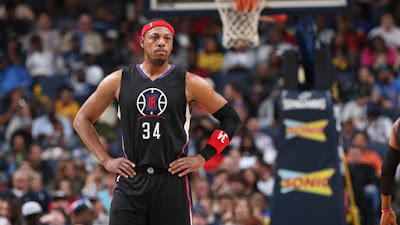 Celtics legend Paul Pierce, who played 15 seasons in Boston and is the franchise's second all-time leader in points scored, has clearly etched his legacy in stone.

Pierce, one of the most prolific scorers in NBA history, ranking 15th on the all-time scoring list, might of started his career elsewhere if it were up to him back in the 1998 draft.

The former Celtic appeared on Showtime's All The Smoke podcast recently to chat with Matt Barnes and co-host Stephen Jackson and spoke about a variety of topics, including where Pierce wanted to get drafted.


"The Clippers was the number one pick, and I was like, ‘Ooh, I wanna go home and play,’ said Pierce. So I worked out for them, and then I asked them for a second workout… I was projected to go No. 2 to the Vancouver Grizzlies. Clippers wanted a big man, they picked [Michael] Olowokandi."

For those who don't know, Pierce was born in Oakland but raised in Inglewood, California. But instead of getting selected at No. 2 or even No. 3, the former Kansas Jayhawk slipped to the Celtics at No. 10, which was a team Pierce didn't even work for.


"The Draft comes, and I just slipped. I'm an All American, I'm a top 5 player in college, I'm up for National Player of the Year, so I’m wondering why is it that I'm slipping. I'm slipping in the draft.”

Obviously it worked out well for Pierce, winning a championship and NBA Finals MVP 10 years later, but he wasn't happy at first.


"I was competitive," he said. "I wanted to be the number one pick, at worst two. So now all those eight, nine teams that passed on me, you're going to feel this one."

Needless to say if Pierce had been drafted No. 1 back in 1998, history as we know it would have been very altered for both the Clippers and the Celtics. While Olowokandi never panned out as a top-draft prospect, the Clippers also missed out on Vince Carter, Dirk Nowitzki, Antawn Jamison and even Jason Williams.

However, Pierce did eventually get to end his career in Los Angeles and suit up in a Clippers uniform, while reuniting with coach Doc Rivers from 2015-2017. 'The Truth' played two more seasons and retired following the 2016-17 campaign.

Pierce averaged 19.7 points, 5.6 rebounds, 3.5 assists, and 1.3 steals per contest in his 19-year NBA career, which spanned 1,343 regular season games and 170 playoff games with the Celtics, Nets, Wizards and Clippers.


Click the video below to watch Pierce's full interview