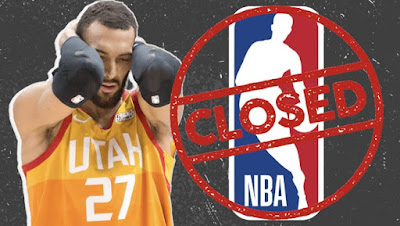 In the middle of a global pandemic, the NBA has suspended their season for at least 30 days or until further notice, which ever comes first.

In the past long-term NBA lockouts, one in 1998-99 and another in 2011, led to shortened seasons of 50 and 66 games, respectively. Both were resolved by means of compromise between two groups, labor and management, or in other words the players and the owners. The current shutdown has a third party involved, the Coronavirus known as COVID-19, and you can't negotiate with a virus. Therein lies the uncertainty of when this shutdown will end.

The National Basketball Association took the extreme route of not simply closing arena doors to the public, as originally discussed - but rather putting an end to all games until - or if - a better solution can be reached. And the shutdown may possibly be the right one, for now following Rudy Gobert and Donovan Mitchell of the Utah Jazz testing positive for the Coronavirus. The total cessation of game play gives Adam Silver and his cohorts breathing room and time to come to a compromise between all parties involved and possibly restart the season with specific precautions in place.

The best solution to most problems lies somewhere in the middle - between the two extremes. The two end-points here are to shut down the season totally or to continue play as though no virus existed. After some quieter down-time, Adam Silver may decide to take the middle ground and restore the season with safety guidelines in place. The truth behind the seriousness of COVID-19 may lie somewhere between the run-for-the-hills view and the it's-nothing-to-worry-about take. That is the path that Will Brink took in the video below. Over several decades, he has helped me with my health and fitness more than anyone else. He takes logic to a high level, and he does his homework.


A sound take on COVID-19, survival and life generally - from one of the most logical individuals I have ever encountered. Worth a look & listen. Have followed Will Brink for decades.https://t.co/qezuJgGYhq pic.twitter.com/EQfkbuddvz
— Tom Lane (@CelticsSentinel) March 12, 2020


The 1998-99 shutdown lasted more than six months, while the 2011-12 lockout went on for more than five months and this one will certainly last at least a few weeks. As Brink put it, the U.S. is not China, and it is not Italy. Age, smoking, concentration of population and the fact that the virus can have a severe effect on people with compromised lung function all come into play. Here's hoping the Coronavirus has few dire, widespread effects in our country, and people, including the NBA owners, players, fans, writers and workers can get back to business.