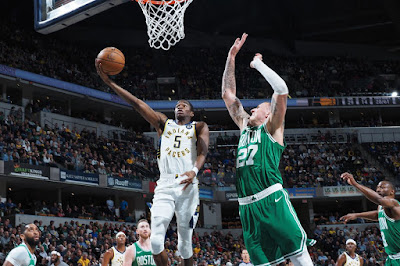 On the heels of the Celtics much needed 114-111 win over the Indiana Pacers on the road Tuesday night, it was Daniel Theis who came up big, much like he has throughout various moments so far during the 2019-20 season.

During TNT's Postgame Show broadcast last night, the question was raised concerning the Eastern Conference team that would give the Philadelphia 76ers the tougher battle - the Miami Heat or Boston. Analyst and former Heat star Dwyane Wade, answered in the following manner:


"You want to go to Miami. You've (Philadelphia) had some success in Miami in the playoffs. You don't want to go to Boston. Why would you?"

Shaquille O'Neal chose the Heat as the tougher opponent for the 76ers, indicating "They (Celtics) don't have a big." Candace Parker took the middle road, stating that both Miami and Boston would be tough to handle in the playoffs, citing "the way Brad Stevens makes adjustments within the playoffs" as a positive factor for the Celtics.


Despite Boston blowing another double-digit lead in their win over the Pacers, Theis came away with 20 points, six rebounds, three assists and two blocks, while hitting 8-of-12 from the field, 2-of-2 on treys (including a game-tying 3-pointer with 1:50 left in the fourth quarter) and 2-of-2 from the charity stripe.


"I'm happy he hit it because at the time when I passed it I thought, man, maybe I should have shot that layup. I was pretty open," said Theis' teammate Gordon Hayward. "But down three, I have confidence in him. That was a big-time shot." [CelticsBlog]


In the last 10 games, Theis' minutes have increased to 28.2, and he has averaged 13.9 points, 8.1 rebounds, 1.8 assists and 1 block per-contest, all while shooting 63 percent on field goals, 38 percent from 3-point range and 89 percent on free throws. His season average of 9.3 points on 56.5 percent shooting and 6.6 rebounds in 58 games played, have far exceeded expectations following the departure of Al Horford.

With the Jayson Tatum, Jaylen Brown on board, plus Kemba Walker and Gordon Hayward playing such major roles, Thies' importance to Boston's success often gets lost in the shuffle. Where Wade picked the Celtics over his former team as Philly's tougher potential postseason opponent and Parker took the middle ground, Shaq's only argument in favor of Miami was that Boston lacked "a big." One would argue that O'Neal's take is flawed, seeing that Thies is doing a better job as Boston's middle-man than Shaq is as an NBA analyst.

The Celtics, who have officially cliched a playoff berth, currently sit in the third spot of the Eastern Conference with a 43-21 record. The Heat are in fourth place, while the 76ers hold down the sixth slot. If the playoffs started today, Philadelphia would take on Boston at TD Garden to begin the first round of the postseason. That could change by the end of the regular season.

Brad Stevens is trying to go into the playoffs with a healthy crew, and it looks like Daniel Theis is the center-of-choice going forward. At 6-foot-8, he may not be a behemoth-of-a-five, but he has done the job at center with aplomb - and he keeps getting better, which shouldn't go under the radar anymore.