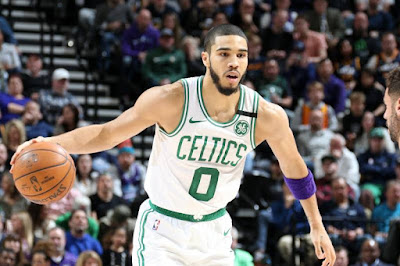 Jayson Tatum's impressive month of February has been recognized by the NBA, as the Celtics forward was named Eastern Conference Player of the Month on Tuesday afternoon.

Tatum, who is celebrating his 22nd birthday today, put up 30.7 points on 49.4 percent shooting from the field, 48.1 percent from behind the arc and 7.9 rebounds during his 12 games in February.


The Celtics went 9-3 in that span, as Tatum interrupted the Milwaukee Bucks Giannis Antetokoumpo's streak of winning the award the last four straight months. Tatum becomes the first Celtic to win player of the month since Isaiah Thomas in January of 2017 and the fifth player in franchise history to grab the honor overall. He joins Larry Bird (seven times), Paul Pierce (four times), Antoine Walker and Thomas on a short list of past winners in Boston.


Tatum, who also made his first All-Star Game appearance in February, wrapped up the month with four straight games of scoring at least 30 points, including tying his career-high with 41 points on 13-of-20 shooting in a loss to the Los Angeles Lakers. A couple of days later, Tatum set a new career-best by hitting eight 3-pointers (8-of-12) and finishing with 36 points in a win over the Portland Trail Blazers.

Tatum, has now scored 30 points 12 times this season after only recording one such effort through his first two years in the NBA. He currently leads the Celtics in points (23.5) and rebounds (7.1), while also averaging 2.9 assists and 1.3 steals in 34.5 minutes played so far this season.