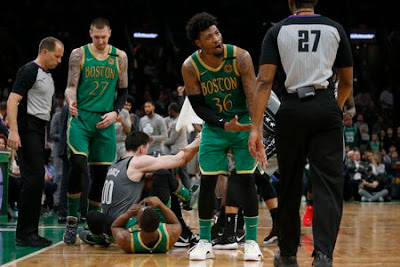 After drawing a 3-point shooting foul on Caris LeVert -- one that led to the Nets tying the game -- in the winding seconds of regulation, Smart fouled out of the game in the opening moments of overtime when he drove coast-to-coast and committed an offensive foul against Nets center DeAndre Jordan.

Smart could only watch his teammates on the receiving end of an 11-2 run in what turned into a 129-120 overtime loss and after the final buzzer sounded, he approached two of the three game referees.

Visibly frustrated, Smart had to be pulled away as he continued to empathically scream at the refs, while the officials seemed to walk away and ignore the angry guard -- which appeared to make Smart even more heated, as the discussion progressed.


Smart was clearly upset about the two last fouls called on him and more than likely the first on the Net's Caris LeVert that sent the game into overtime, while the Celtics were leading 118-115 with 0.2 seconds left on the clock. Here's a look at the last play in regulation below.


Marcus Smart with a pointless foul on LeVert to send this to OT... pic.twitter.com/AIBNeb3jQe
— Tony Clements (@TonyClementsTC) March 4, 2020


At the very least Smart could be facing a fine from the NBA, but as of late Wednesday afternoon, no announcement on any type of punishment in a form of a suspension had been made.

The Celtics will be down three starters in Kemba Walker (knee), Gordon Hayward (knee) and Jaylen Brown (hamstring) tonight when they face the Cleveland Cavaliers on the road.