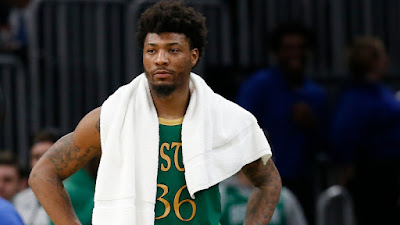 The NBA came down on Marcus Smart Thursday morning, slapping the Celtics guard with a $35,000 fine for his involvement in a postgame altercation, according to ESPN's Adrian Wojnarowski.

Smart, who fouled out of Tuesday night's overtime loss against the Nets, approached the referees at center court shortly after the game ended and had to be held back by team security after lunging towards official John Goble. Smart continued to yell obscenities as both parties were separated.


The fine doesn't come as a surprise. Smart, who's paid his fair share of fines throughout his six-year career, including a $50,000 fine he paid for shoving Sixers center Joel Embiid last season and a $15,000 fine he paid the season before for publicly criticizing officials.

Smart, and the Celtics return to action Friday night against the Jazz at TD Garden.